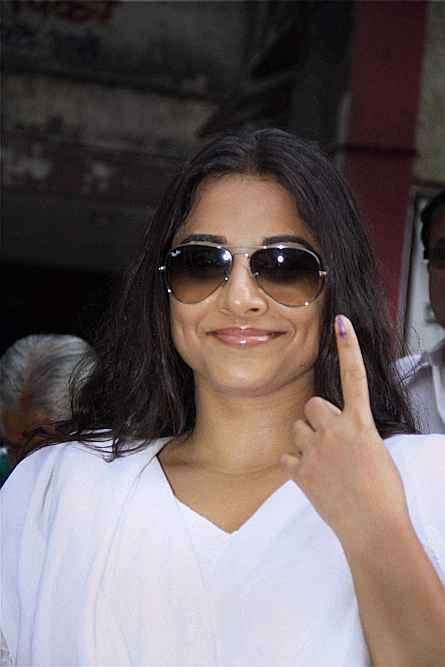 Many leading faces from Indian cinema flaunted their inked fingers at the Mumbai polls today but celebrities like Priyanka Chopra, Anil Kapoor, Shabana Azmi, Javed Akhtar and Sonakshi Sinha skipped the electoral process to attend IIFA awards in the US.

The ones who flaunted or talked about casting their votes were Amitabh Bachchan and family, Shah Rukh Khan, Farhan Akhtar, Aamir Khan, Ajay Devgn, Vidya Balan and Preity Zinta.

Farhan, who is hosting the awards night with Shahid Kapoor on April 26, stayed back to cast his vote before leaving for Tampa Bay, Florida, where the four-day-long award ceremony is taking place.

Zinta also flew down from Abu Dhabi to exercise her voting right. Kangana Ranaut and Subhash Ghai took a break from promoting their films to cast their votes.

But there was a clash of interests as IIFA and Mumbai voting day happened on the same day.

Sonakshi Sinha's actor-politician father Shatrughan Sinha may be in the fray this Lok Sabha elections from Patna Sahib but the actress is in IIFA.

"Finally made it to Tampa Bay after a crazy 32 hours!!! Thank you for the love," Sonakshi tweeted yesterday.

While Kirron Kher, who is fighting on a BJP ticket from Chandigarh, cast her vote with son Sikandar today, her actor-husband Anupam Kher is in the US to attend IIFA.

"Reached New York. And now Tampa walo! I am on my way to you. Love you all.:) Landed finally in Tampa," Anupam Kher, tweeted on April 22. Kher will premiere his short film 'I Went Shopping for Robert De Niro' at IIFA.

Haidari, clearly perturbed by fans' attack on Twitter, tweeted that she was not a voter from Mumbai.

"Calm down all you aggressive people... My vote is registered in Delhi and not Mumbai...," she tweeted.

Sonam Kapoor took to Twitter today to flaunt her inked finger but her actor-father Anil Kapoor is attending IIFA.

"The madness in Tampa begins," he tweeted with a photo.

Vivek Oberoi, who was campaigning for BJP recently, gave the voting process a miss to attend IIFA.

"Madness at IIFA Stomp! Tampa rocks! Incredible energy and so much love... Thank you for all the love! I feel so blessed and you guys totally rock," Vivek posted on Twitter.