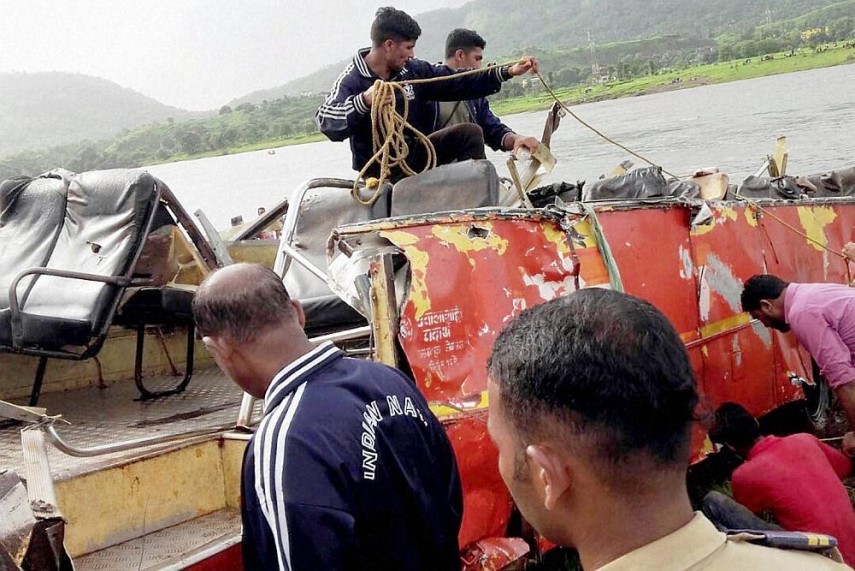 Two highly decomposed bodies, suspected to be those of Mahad bridge collapse incident victims, have been found at Velas beach in Ratnagiri district, nearly 60 km away from the mishap site, district authorities said here today.

"The two bodies were found at Velas beach in Ratnagiri district yesterday by local residents and local administration informed us about it. Since the bodies are highly decomposed and beyond recognition, DNA tests would be conducted to ascertain their identity," a senior Raigad district official said.

The death toll in the Mahad bridge collapse incident has reached 28 after navy divers on August 14 found the wreckage of a washed away SUV and recovered two bodies trapped inside it on August 14.

"The process of verifying the bodies found at Velas is underway and their DNA samples would be taken to see if they match with those of the relatives of Mahad victims, who are yet to be traced," the official said.

Satish Bagal, Resident Deputy Commissioner of Raigad district said, "The bodies would not be shifted to Raigad, but kept in a rural hospital in Ratnagiri district. The process to retrieve the DNA samples is on and it would be tallied with the samples of the relatives."

"Only if the test results show that the DNA samples are matching, we can declare that they are victims of Mahad bridge collapse incident. Once that is done, their relatives can be given compensation," Bagal added.

The state government has announced a compensation of Rs 14 lakh each to the kin of deceased travelling in the MSRTC buses and Rs 10 lakh each to the family of the deceased in other vehicles involved in the tragedy.

Two buses of Maharashtra State Road Transport Corporation (MSRTC) and a few private vehicles were washed away after the bridge crashed amid heavy rains on August 2.

The decades-old structure on Savitri river was to be dismantled in December this year as part of the Mumbai-Goa Highway expansion project.

Continue FREE with Ads Pay Rs. 1 to Read Without Ads
READ MORE IN:
National
Next Story : Rajnath Singh Hits Out at Pak for Unrest in Kashmir
Download the Outlook ​Magazines App. Six magazines, wherever you go! Play Store and App Store