Bo Xilai Found Guilty on All Charges, Sentenced to Life 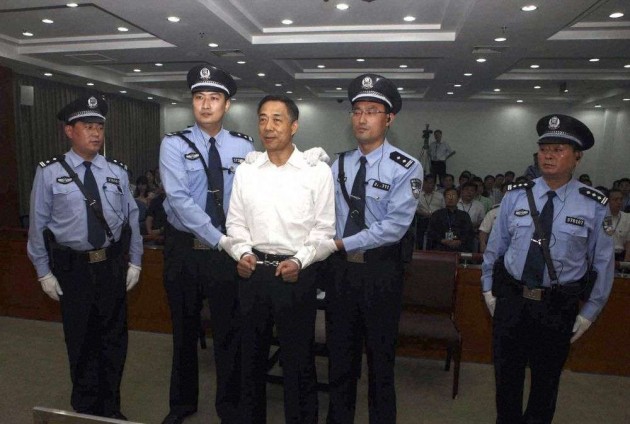 Print
A
A
A
increase text size
Outlook September 22, 2013 09:03 IST Bo Xilai Found Guilty on All Charges, Sentenced to Life

Disgraced top Communist Party leader Bo Xilai was today sentenced to life for corruption and abuse of power by a Chinese court, which effectively ended a stiff challenge posed by pro-Maoist faction against the reform minded new leadership headed by President Xi Jinping.

Curtains came down on China's biggest political trial for decades when the Jinan Intermediate Court in east China's Shandong province convicted the 64-year-old former Politburo member and Chongqing city Communist Party chief on all the three charges of bribery, embezzlement and abuse of power.

In its judgement delivered at a packed room, the court sentenced a defiant Bo to life in prison on the graft charges, 15 years for embezzlement and seven years for abuse of power.

"Bo Xilai was a servant of the state, he abused his power, causing huge damage to the country and its people ... The circumstances were especially serious," the court said in its judgement as a defiant Bo smiled.

A charismatic Bo, widely expected to be front runner for a top post in the once-in-a-decade leadership change of the ruling Communist Party last year, was sacked as the head of Chongqing city and removed from the party following charges of bribery, embezzlement and abuse of power against him.

The court, which last month conducted an unprecedented "open trial" with periodic updates on microblogs for five days, also stripped the fallen politician of all political rights and ordered the confiscation of his properties.

After the sentencing, Bo was seen handcuffed, with clenched fists and flanked by two towering policemen who held him by his shoulders and forearms as he was escorted out.

Bo was convicted for bribes totalling 20.44 million yuan (about USD 3.3 million) when he was the head of Dalian city, where he carried out a vigorous modernisation drive making it one of the most high-profile port cities in the world.

The fallen politician took advantage of his position as head of Dalian party unit, Governor of northeastern Liaoning Province and commerce minister of China to seek benefits for others, the verdict said.

Bo, who vehemently denied all charges, would file an appeal against the judgement to a higher court in Shandong province whose verdict would be final, the Hong Kong-based South China Morning Post said.

The hearing was regarded as the Communist China's most sensitive political trial after the 1981 'Gang of Four' trial involving Mao Zedong's widow Jing Qing.

The court dropped one of the corruption charges saying that there was insufficient evidence to show that Bo accepted 1.34 million yuan worth of air ticket fees as bribes. Bo's wife and son accepted air ticket fees from a businessman, according to the indictment during the first trial in August.

As the son of one of China's 'Eight Immortals', leaders of the Chinese revolution revered by the Communist Party, Bo was so powerful that a number of central leaders including those in the present set up visited Chongqing and praised his leadership qualities until his downfall last year.

His downfall was set in motion by his wife Gu Kailai's murder of British businessman Neil Heywood, which followed defection of his top police aide Wang Lijun to a US consulate in Chengdu.

Gu was given a suspended death sentence, whereas Wang is serving a 15-year prison term for his act to take asylum in US Consulate as well as bribery and other crimes.

Like most of the top leaders who were prosecuted, Bo was expected to serve his life sentence at the Qincheng Prison in Beijing where he will be provided decent facilities. He won't have to wear a prison uniform and get access to good food.

The cells are about 20sq metres-large with individual toilets besides public heating system which is switched on earlier than to the public in Beijing, the Post reported.

Former Railways Minister Liu Zhijun, who too was convicted corruption last year, is serving his suspended death sentence in the same prison.

Bo's trial and sentence was seen as a prelude to another high-profile case involving Zhou Yongkang, one of the nine members of former Standing Committee headed by ex-President Hu Jintao which ruled he country till last year.

Bo has dropped the names of both Zhou and Hu himself saying that he acted under their instructions.

During the trial, he said he had informed Hu about the decision to grant permit to a businessman to import and oil and gas. Also, he followed the instructions of Zhou in dealings with Wang's defection.

Zhou, who retired last year, was connected with oil and gas industry for long and is reported to be facing probe.

Regarded as Bo's mentor, he was also expected to go on trial soon.

Continue FREE with Ads Pay Rs. 1 to Read Without Ads
READ MORE IN:
Bo Xilai International
Next Story : Like 1977, 2014 Polls Will be the Voice of the People: Modi
Download the Outlook ​Magazines App. Six magazines, wherever you go! Play Store and App Store