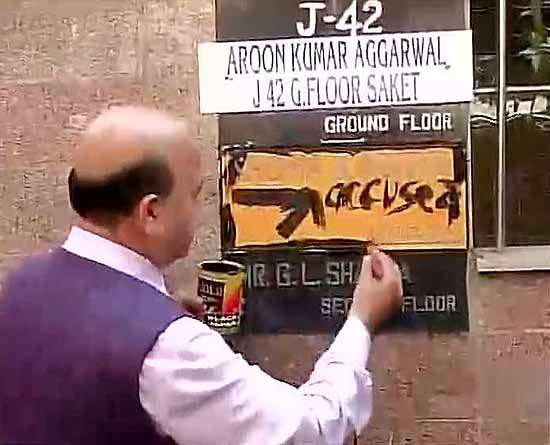 The protesters shouted slogans against Chaudhury accusing her of cover up in the alleged sexual assault on a Tehelka journalist by its editor Tarun Tejpal and painted the word 'accused' on her nameplate. Some of them even went on to surround and jostle her as she was leaving her house in Saket.

Accompanied by protesters, Jolly had painted the gate of Chaudhury's residence and graffiti the word "accused" onto her name plate.

The BJP workers had protested outside the residence of Chaudhury, demanding her immediate arrest for allegedly trying to cover up sexual harassment complaint filed against Tejpal.

As criticism poured in against him, Jolly remained defiant, saying he was not ashamed of his act.

"I am not ashamed of the protest. Shoma Chaudhury has been trying to protect Tarun Tejpal. Ordinary people are seething with anger against Chaudhury for the way she tried to protect Tejpal. It is my right to protest," he said.

Asked whether he will tender an apology to Chaudhury, Jolly said no "I did not do this for fame, I did not violate the law of the land."

Chaudhury filed a complaint with NCW regarding her house being vandalised allegedly by the BJP workers following which the Commission asked police to file an FIR against the perpetrators.

"My home was attacked and defaced. It is very distressing. I am very upset about it. Then there are mistakes that must be discussed and I think there should be measured public discourse, which will be very useful one."

"I have absolutely no problem being questioned by anybody and definitely by my own fraternity, but I think what is problematic is the tone, because it creates this kind of volatile situations," said Chaudhury.

Chief Minister Sheila Dikshit lambasted Jolly, saying nobody has a right to take the law into their hands.

An FIR in this regard was registered at Saket police station under section 341 (Obstruction), 427 (Mischief), section 3 of the Prevention of Defacement of the Properties Act, 143 (Unlawful Assembly), 149 (part of unlawful assembly) against Jolly and others here this evening.

The incident received wide condemnation and BJP distanced itself from the protesters with senior party leader Sushma Swaraj saying their act was "not civilised".

Swaraj, and former BJP president Nitin Gadkari, said the protest was carried out by the workers in their personal capacity and the party had nothing to do with it.

Necessary action would be taken against those involved in the protest, they added. BJP will seek an explanation from Jolly on the issue and take necessary action, both averred.

"(BJP) has nothing to do with the incident. I can never endorse it and agree with it... It is not in line with the party's ideology and, at the same time, it is not civilised.

I disapprove of what Shri Vijay Jolly has done at the residence of Ms.Shoma Chaudhary.

Chaudhury resigned early this morning from Tehelka, even as Goa police appeared to be closing in on Tejpal who has to appear before it by 3 PM today.

There is speculation that Chaudhury may also be named in the FIR for certain acts of commission and omission after the alleged offence became public.

Meanwhile, there was an outrage on twitter over Jolly's act. Below are some of the reactions:

Is Vijay Folly contesting the Delhi elections? If he isn't why doesn't he become a hoarding painter? #VijayFolly

This kind of behaviour in public life is unacceptable. He shud regret http://t.co/qLBVXD26lw pic.twitter.com/UTpBZGOn8k

Vandalising Shoma C's house is shameful! By doing so BJP can't pretend to care about justice for the rape survivor.

And Mr Vijay Jolly, go get a life. Had a pumpkin yday in Naresh Aggarwal, today its you!