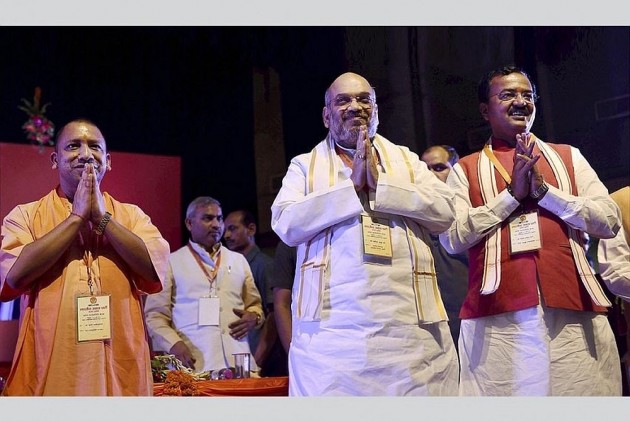 Print
A
A
A
increase text size
Outlook May 08, 2017 14:14 IST BJP's UP Win Was Certain, Irrespective of Who Contested From SP, Says Deputy CM Keshav Prasad Maurya

Commenting over the latest development in the Samajwadi Party's deepening rift, Uttar Pradesh Deputy Chief Minister Keshav Prasad Maurya on Monday asserted that Bharatiya Janata Party's (BJP) emphatic win was certain, irrespective of who had contested the state polls from the Samajwadi Party

Maurya told ANI, "This is the fight between father and son but I believe BJP win was certain irrespective of whether the SP supremo, the then UP Chief Minister or Shivpal Yadav had contested the state polls from the Samajwadi Party."

Mulayam Singh Yadav yesterday said that he was strongly opposed to a split in the Samajwadi Party, while berating son Akhilesh Yadav's move to ally with Congress, which he claimed had left no stone unturned to "ruin" him.

"The Congress party did not leave a single chance to ruin my life and Akhilesh formed an alliance with the same party for the 2017 Uttar Pradesh assembly elections," Mulayam said at public rally.

Further hitting at the Congress he said, the grand old party had lodged various cases against him.

Backing his brother Shivpal Singh Yadav's comment where he likened Samajwadi Party leader Ramgopal Yadav as 'Shakuni', Mulayam said, "Whatever he (Shivpal) said is true," adding, that attempts were made to ensure Shivpal's defeat.

In a development confirming the split within the Samajwadi Party, Shivpal Yadav earlier announced the formation of a new party 'Samajwadi Secular Morcha'.

"In order to restore his (Mulayam) lost dignity and to bring all the Samajwadis together, there will soon be an announcement of this secular front in Lucknow," Shivpal told ANI.

Shivpal will soon be meeting state and national level leaders regarding the same. The party will also include minorities, farmers and youth.

Shivpal asserted that Akhilesh should first unite the party and the family.

Mulayam, earlier in April, had blamed Akhilesh for the Samajwadi Party's poor performance in the Assembly Elections and said that his son had insulted him and the voters understood that "one who is not loyal to his father, cannot be loyal to anyone" which led to the party's poll debacle.

"I was badly insulted, which I had never faced in my life. Nevertheless, I tolerated it. No leader of any party in India had made his son a chief minister during his lifetime, but I made Akhilesh the Chief Minister of UP," he said.

The Samajwadi Party got only 47 seats out 403 in the Uttar Pradesh elections. (ANI)