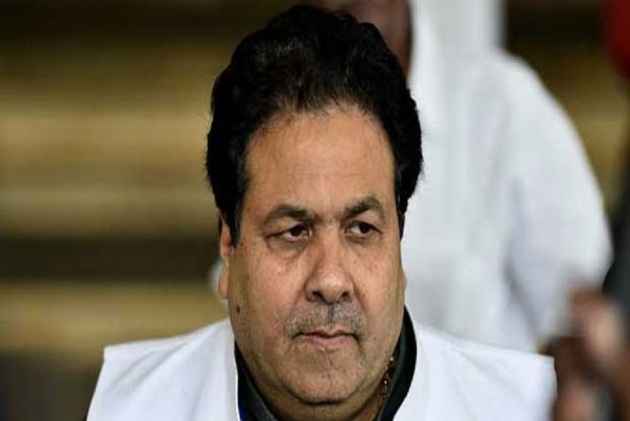 The Congress today hit out at the BJP-led NDA government at the Centre, on its third anniversary, accusing it of having failed on all fronts and using cow and Ram temple issues for votebank politics.

Asserting that the Congress has never supported cow slaughter, the party's spokesperson Rajiv Shukla said three Youth Congress activists have been suspended for butchering a calf in Kannur district of Kerala.

"Congress has always been against cow slaughter... But the BJP has been politicising this issue and connecting it with votebank politics," he said at a press conference here.

On Ram temple issue, Shukla said, "For the BJP, Ram temple issue crops up just when elections near. When it is over, they forget Lord Ram. For 25 years now, they are misleading people on this issue."

"They (BJP) use it (Ram temple issue) for votebank politics. As far as the Congress is concerned, whatever court decides will be acceptable to us," he said.

Shukla mentioned Vyapam issue to take at dig at the BJP and said, "When the BJP government or its ministers are in the dock, they pretend themselves to be Vinoba Bhave (freedom fighter and social reformer) and remain silent."

On presidential election, Shukla said, "If there is a candidate on whom consensus can be built, then it is okay for us, but in the absence of a consensus, then opposition will take a call.

"Traditionally, it is the government which makes initiative on Presidential candidate. We are waiting for them on this issue," the Congress leader said.

Speaking on Kashmir issue, he emphasised that the peace process should be restored people's faith has to be won and tourism needs to be promoted in Jammu and Kashmir.

On the issue of stone pelting in the Valley, Shukla said, "Whatever the Army does to tackle it we are with them."

Asked why did the Congress perform poorly in Uttar Pradesh election, he said, "Anti-incumbency was a factor. Since the BJP was in power at the Centre they took advantage of it and also indulged in communal polarisation."

"However, despite the result, no one can say Akhilesh Yadav's government did not undertake development works. The SP got 80,000 to 90,000 votes per constituency like in 2012, but the BJP got a couple of thousand votes more," Shukla said

He claimed that if the votes of the SP, the BSP and the Congress per constituency are combined then it would be 1.5 times more than what the BJP got and if there is a grand alliance ahead of the 2019 Lok Sabha polls, it would reflect in the results.

Accusing the Narendra Modi government of implementing and claiming credit for various flagship schemes of the UPA government despite the BJP criticising those in the run up to the 2014 Lok Sabha polls, Shukla said, "They are coming across like a duplicate government copying our things."

He calimed that the BJP government is doing flip-flop on foreign policy and said, "Inconsistency, unpredictability and u-turns define the Pakistan policy. There is inaction, lack of political will and direction."

Although China blocks India's membership in Nuclear Suppliers Group or the UN Security Council, our imports from the neighbouring country have increased, Shukla said.

Taking a dig at the Centre's Ganga rejuvenation project, the Congress leader said so much money have been spent but it has not yielded results.

On Swacchh Bharat scheme, he asked, "Where does Rs 10,000 crore collected as Swachh tax per year go? There is no accountability."

Shukla evaded questions pertaining to infighting in the state Congress but said the party high command takes notice of activities taking place in the state unit.

Yesterday, Congress MLAs in Haryana loyal to Bhupinder Singh Hooda had skipped a meeting called by Tanwar raising speculation that there is a rift between the two leaders.

At a press conference yesterday called by 11 MLAs, who had skipped the party meet and have been pushing for Tanwar's removal as state Congress chief, came out openly in support of Hooda, who is facing the heat in Manesar land deal case being investigated by the CBI.