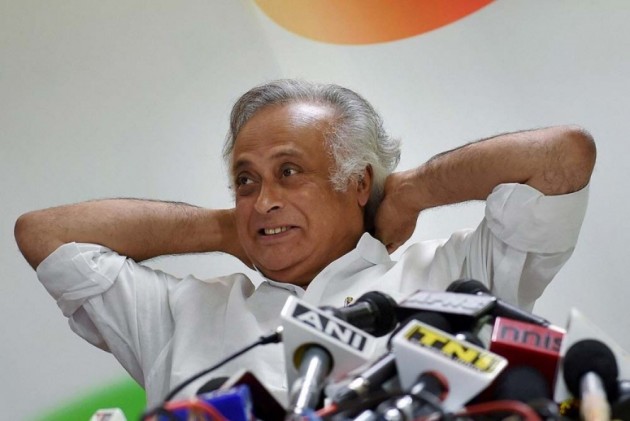 Congress on Thursday stuck to its demand that the Prime Minister hear them out and reply to concerns raised in Rajya Sabha during the demonetisation debate, saying it was only treading the path shown by BJP during discussion on the 2G spectrum scam in August 2013 when it was in opposition.

Congress spokesperson Jairam Ramesh said that just as BJP demanded the Prime Minister's presence in the Upper House in August 2013, the Congress has every right to do so.

"We are adopting the same principle as done by BJP in 2013 when it demanded that the Prime Minister clarifies. We are also demanding that Prime Minister Narendra Modi clarifies to concerns raised by opposition," he said.

He said former Prime Minister Manmohan Singh, who strongly criticised demonetisation in Rajya Sabha, was speaking through his rich experience on behalf of farmers and unorganised sector workers.

He said Singh, who has a lot of experience in public life and has held many top positions in the government, chooses his words judiciously and does not resort to theatrics.

"Dr Singh chooses his words judiciously and doesn't resort to theatrics. Singh spoke on behalf of farmers and the informal sector. The Prime Minister should listen to the views of his predecessor. We want the Prime Minister to clarify his position," Ramesh said.

The Congress leader said Singh has warned in his speech that India's GDP growth could be negatively impacted by at least 2 percentage points. He said experts have feared that the GDP growth rate this year will be only 5 per cent.

Insisting that the opposition has decided that if there is "No PM, then no debate", Ramesh said the opposition is well within its rights to demand the Prime Minister's presence.

On Finance Minister Arun Jaitley's charge that the opposition was running away from a debate, the Congress leader said they wanted to take the debate further "But BJP and PM keep on running (away) from the debate".

Ramesh said if one looks at the footage of Rajya Sabha proceedings, one finds members of the treasury benches being provoked to shout and come to the Well of the House.

"This is a bizarre situation that MPs of the treasury benches are being provoked by their senior leaders to protest. What does it mean? It means it is the government that does not want the debate. The opposition wants the debate," he said.

"The Prime Minister goes to Japan, he goes to Goa, he goes to Ghazipur, he goes everywhere and he does this big drama about threat on his life when how he has transformed the nation. So, why can't he sit in the House? He should sit, he should listen, he should respond and it will take a maximum of a four hours," he said.

The Congress leader said he refused to believe that the Prime Minister cannot spare four hours for Parliament where he touched the ground the day he became the Prime Minister, and said he is going to a 'sacred temple'.

He said earlier in the day all opposition parties got together and held a meeting in Leader of Opposition in Rajya Sabha Ghulam Nabi Azad's chamber and decided that there would be no debate in the House till the Prime Minister attends and hears them out and replies to their concerns.