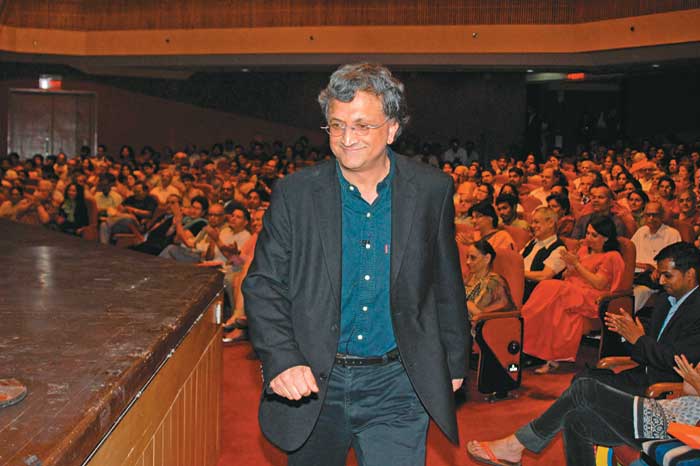 Noted historian Ramchandra Guha today said there is a dearth of right-wing intellectuals in the country as he dismissed RSS as a bunch of "low-level ideologues" and termed BJP as the most "anti-intellectual" party.

He also said what is happening in JNU is "worrisome".

"There is a certain level of truth to the accusation that universities have been colonised by the Left. But that cannot be changed unless the Right throws up better people. You cannot have your principal spokesperson in Anupam Kher, or still less Praveen Togadia, or Smriti Irani. They will only drive our discourse further and further into the mud.

"BJP is sadly the most anti-intellectual party. Unfortunately, RSS were the most profoundly anti-intellectual people. (M S) Golwalkar was a garden-variety bigot. We don't see people like C Rajagopalachari, who was a profound and complicated thinker," he said at the Penguin Spring Fever festival here.

"Although worrying, the rise of right wing nationalism in the current date is by no means as bad as what happened in the 80s and 90s. It is at the moment geographically confined. UP is worrying because it is a large state that is why the stakes are highest," he said.

Guha also said that within India, the thought of Hindu fundamentalism was much more terrifying than Islamic fundamentalism, because they are the majority.

"Globally, Islamic terrorism is a very, very dangerous phenomenon and is a danger to the survival of human civilisation. But within India, Hindus are 85 per cent. Hindu fundamentalism is much more dangerous than Islamic fundamentalism. I am terrified at the thought of Hindu majoritarianism, because that is what we were not. If India was anything, it was not to be a Hindu Pakistan," the historian said.

He said religious pluralism was always fragile in India, and stressed on the need to be vigilant against fundamentalists on all sides.

Guha also talked about the rising tendency of people to view scholars as people not very useful to the country, saying that the denunciation of scholarships and universities was "unfortunate".

"This kind of vulgar denunciation of scholars and scholarships and universities is deeply unfortunate. Though one should not exaggerate how widespread it is, what is happening around JNU is worrisome. I think the attack on our universities is unfortunate and ill-timed," he said.

"Everyone plays a role in society. I am sure many people in JNU agree that soldiers play a more important role than scholars. In my opinion, teachers and doctors play an important role. Scholars play a role in shaping the national consciousness and understanding," he added.