BJP Stakes Claim To Form Government In Goa, Parrikar To Be CM 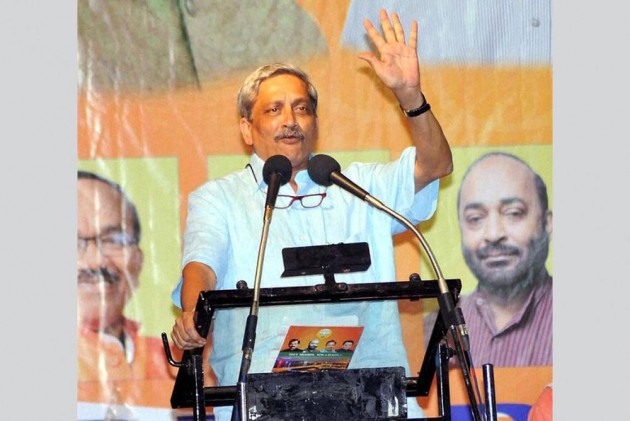 Print
A
A
A
increase text size
Outlook March 13, 2017 09:09 IST BJP Stakes Claim To Form Government In Goa, Parrikar To Be CM

Despite being a runner-up behind the Congress, the BJP today pulled off a coup and staked the claim to form the next government in Goa in coalition with local outfits and independents under Manohar Parrikar, a day after the fractured verdict.

As the saffron party outmanoeuvred the Congress in its bid for power, AICC general secretary Digvijay Singh has accused Parrikar of indulging in "horse trading and "hijacking the popular mandate which was in favour of the Congress."

Capping the day of fast-paced developments, Goa Governor Mridula Sinha tonight appointed Parrikar, the BJP Legislature Party leader, as the chief minister and asked him to prove majority on floor of House within 15 days of taking oath.

In evening, the BJP members led by the incumbent Defence Minister called on the Governor and formally staked the government formation claim.

The BJP has enlisted the support of two independents, three members each of the Goa Forward Party (GFP) and the Maharashtrawadi Gomantak Party (MGP).

Though the lone NCP member Churchill Alemao has also backed the coalition, he is yet to submit the formal letter of support.

"Governor Mridula Sinha has appointed Manohar Parrikar, the Leader of the Goa BJP legislature party, as the chief minister of Goa," Rupesh Kumar Thakur, Secretary to Governor has stated in the press note issued here tonight.

Parrikar has submitted evidence before Governor, the support of 13 MLAs of BJP, 3 MLAs of MGP, 3 of Goa Forward party and two independent MLAs thus having a total strength of 21 MLAs in the 40-member assembly, it stated.

"The Governor has asked Parrikar to prove majority in the Legislative Assembly session within 15 days after administration of oath of office," the note said.

The BJP, which has bagged 13 seats, four less than the Congress which has emerged as the single largest party, stole the march on its rival which has failed to muster the numbers to capture power.

"Though the BJP fell short of the numbers required to form government, with the help of alliance partners, the magical figure of 21 seats is achieved.

"I promise that we will give stable government which will work towards the development of the state," Parriakr told reporters in a joint press conference with Union minister and BJP's Goa election incharge Nitin Gadkari.

Addressing reporters after the BJP staked the claim, Gadkari said Parrikar will resign as Defence Minister before taking oath as Chief Minister of Goa.

"When none of the parties could get absolute majority in Goa, it was obvious that we would form the government with the like-minded parties. I held meetings with MGP and Goa Forward Party who put forth the condition that they would support the party only if government is led by Manohar Parrikar," he said.

Gadkari said the decision to send Parrikar, who was doing a "tremendous good job as defence minister, back to Goa has been endorsed by BJP Parliamentary Board. (More) Deploring the BJP's move, Digvijay said, "It is absolutely

wrong on the part of the BJP to grab power when the mandate was given to the Congress by the voters (by virtue of being the single largest party)."

Singh said being the single largest party, the Congress had the "first right as well as the popular mandate" to form government, which has been "hijacked by Parrikar."

"Parrikar has brought down the morality of politics in the country. His act of indulging in horse-trading has affected the morale of Goan politicians," he said.

The Congress was apparently counting on the support of the GFP which has won three seats in its debut election. However, the BJP succeeded in keeping the Congress at bay.

The GFP initially had an adjustment with the Congress, but the latter fielded its nominees against Vijai Sairdesai in Fatorda and Vinod Palyekar in Siolim. Another debutant MLA of the party is Jayesh Salgaonkar from Saligaon.

Digvijay had said the Congress has the numbers to form government, but the BJP was indulged in "horse-trading" to reach the majority mark.

"BJP has been involved in horse-trading, promising sums, ministries, corporations and SUVs to non-BJP MLAs to get their support.

"I have never seen in any other state where a political party which has been outrightly rejected, where the CM has lost, six ministers have lost, yet they are staking claim to form the government," he told reporters.

In afternoon, the newly-elected BJP MLAs passed a resolution urging party chief Amit Shah to nominate Parrikar as the leader of the legislature party.

The GFP leader Vijai Sardesai told media persons they are extending support to the BJP to provide stable government in the coastal state.

"We are supporting BJP to have stability in the government. We don't want development of the state to hinder due to instability," he said.

The MGP leader Sudin Dhavalikar said his party has supported the BJP on the condition that only Parrikar heads the state government.

"We have given the letter of support to the BJP only because of Parrikar. Without him, we would not have supported the BJP to form the next government," he said.

Among the local outfits who have extended support to BJP, the MGP was the erstwhile ally in outgoing BJP government, before it pulled out ahead of polls last month in protest against the leadership of former chief minister Laxmikant Parsekar.

The Independent candidates who have extended support are Rohan Khaunte (Porvorim) and Govind Gawde (Priol).

Continue FREE with Ads Pay Rs. 1 to Read Without Ads
READ MORE IN:
Manohar Parrikar National
Next Story : Political Analysts Say BJP's March To Tamil Nadu Or Kerala May Have To Wait For Some Years
Download the Outlook ​Magazines App. Six magazines, wherever you go! Play Store and App Store