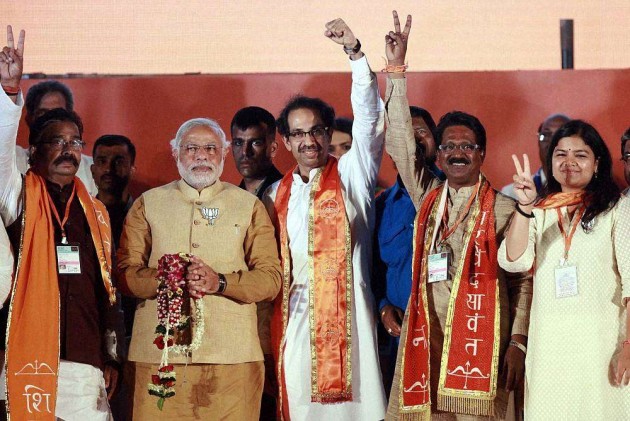 A day after the ice was broken, Shiv Sena and BJP leaders today held talks to end the tangle over seat-sharing for Maharashtra Assembly polls but failed to reach an agreement.

The two oldest NDA allies, however, insisted they did not want the alliance to come apart.

Leader of Opposition in the Legislative Council Vinod Tawde said Shiv Sena has proposed to contest 155 seats, leaving 125 for BJP, while the remaining of state's 288 seats would go to the smaller allies. "This is unacceptable to us," Tawde, a BJP leader, said.

September 27 is the deadline for filing of nominations for the October 15 polls.

"There will be a clarity on the alliance issue in the next 24 hours," Tawde said.

Shiv Sena has, meanwhile, said a decision on the alliance may be taken tomorrow.

"Uddhavji has been authorised by the party to take a call on the alliance. Shiv Sena executive committee is meeting tomorrow and an announcement is likely to be made," Sena spokesman and MP Sanjay Raut said.

"We are doing all we can to keep the alliance intact. It is a bond of 25 years," Tawde said, adding "we feel that it should not break over issues like which party gets how many seats and which leader becomes the chief minister."

Tawde said BJP was stressing on discussing the 59 seats Shiv Sena and 19 seats BJP had contested but did not win in the last five elections. "There needs to be a restructuring so the party which can win these seats should field its candidate there," he said.

"Our aim is that we should win at least 200 of the 288 seats to give 11.88 crore people of Maharashtra a progressive government," he said.

Meanwhile, senior Sena leader Anil Desai insisted there is no threat to the alliance between the two parties which "is going to stay".

"We are aware of the fact that the Mahayuti is very important for Maharashtra. The alliance between us is definitely going to stay. More than the offer (of seats), alliance is important. Uddhavji will announce his decision within 24 hours," he told reporters after meeting the Sena chief.

"Media reports that our alliance will break is a fiction. We are only working out the finer points before we announce our seat-sharing formula," he said.

Fadnavis will speak to Uddhav Thackeray on the seat-sharing issue, Mathur told reporters tonight after the second of the core committee meeting at Khadse's house.

"Yes, I will be meeting Uddhavji," Fadnavis said but declined to comment on when will the meeting take place.

Asked if it will be either Modi or Amit Shah who will be taking a final decision on BJP's stance on the Sena's response on sharing of seats, he said, "Om Mathur will take the decision."

Meanwhile, a senior BJP leader who participated in the core committee meeting told PTI that BJP was not satisfied with the Sena's response. "They are making things difficult," he said.