BJP Retorts To Gandhi's 'Peeping In Bathroom' Remark For Modi, Says He's Behaving 'As Per His Standards' 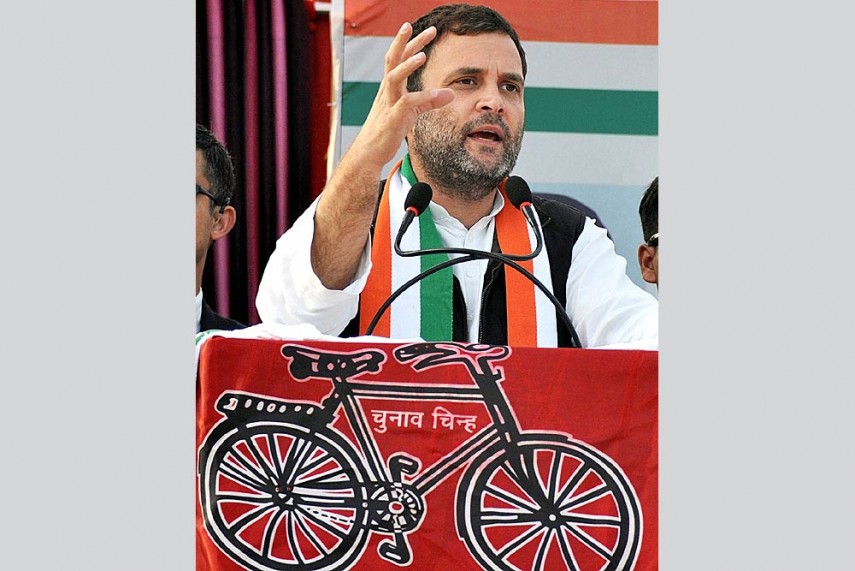 Print
A
A
A
increase text size
Outlook February 11, 2017 16:08 IST BJP Retorts To Gandhi's 'Peeping In Bathroom' Remark For Modi, Says He's Behaving 'As Per His Standards'

BJP today hit back at Rahul Gandhi for his remarks against the Prime Minister, saying the Congress leader "behaves as per his standards" and it does not expect anything better from him.

At the unveiling of common minimum programme of SP-Congress alliance in Lucknow, Rahul today took a swipe at Narendra Modi for his "raincoat in bathroom" barb at Manmohan Singh, saying the Prime Minister was more interested in "peeping into bathrooms of people".

"SP and BSP are not options for people. Only BJP is the right alternative. Only BJP can do holistic development of the state and will win the polls with a big mandate," he said at a press conference.

Targeting Samajwadi Party (SP) Chief Akhilesh Yadav, he alleged that the state's public service commission was embroiled in scam and there was discrimination in handing over laptops to students by the SP government.

Asked about the support announced for Mayawati-led BSP by some Muslim clerics, the BJP leader downplayed it saying everybody has a right to seek votes for a leader of their choice but people take a judicious call.

He claimed BJP has maintained its "prime" position in Uttar Pradesh, which it had swept in 2014 general election.

He said a BJP survey had shown tha the party will win majority of the seats which went to polls today and will get a "big mandate".

He also cited the party's win in all three graduate constituencies of the Legislative Council elections as evidence of popular support. Its results were announced today.

Referring to murder of a youth in Bijnor last night, he said law and order has been "destroyed" under the SP government.

Women and dalits have suffered the most, he said, adding that on an average 13 murders had occurred daily.