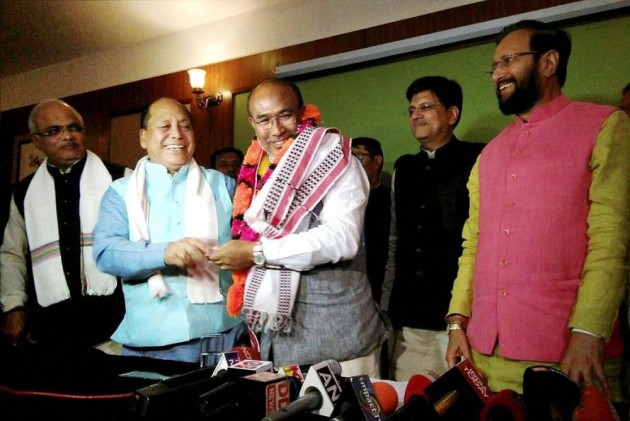 Print
A
A
A
increase text size
Outlook March 20, 2017 15:49 IST BJP-Led Government Wins Trust-Vote In Manipur With A Voice Vote

The BJP-led government today won the floor test in Manipur Assembly with a voice vote.

There was no division of votes in the exercises which saw the lone TMC MLA also supporting the Nongthombam Biren Singh government.

The BJP has 21 MLAs in the 60-Member house. It has the support of four MLAs of Naga Peoples' Front (NPF), four of National Peoples' Party (NPP), the lone MLA of Lokjanshakti Party and Independent MLA Asab Uddin besides a Congress legislator who was inducted also in the Council of Ministers.

Lone Trinamool Congress MLA T Robindro Singh also extended support to the BJP-led government although his party's central leadership alleged that he had "not consulted the party" over it.

"I have extended support to the BJP after consulting the party's central leadership. I have neither violated the party's order nor have done anything against its interests. Whatever the party had asked me to do, I have done that," Singh told PTI.

The TMC legislator argued that had he violated the party line he would have faced disciplinary action.

"But that the party did not do any such thing means it stands by me," Singh said.

TMC vice president Mukul Roy said, "After winning the election, Singh was in touch with the Congress as we had told him that if the Congress is in a position to form the government and need our support we will extend our support."

"But the Congress failed to get the numbers and Singh, without discussing the matter with us, went to meet the BJP leaders and accompanied them to the Raj Bhawan," he said.

Earlier in the day, Yumnam Khemchand Singh of the BJP was elected as the new Speaker of the House. He was also elected by voice vote against Congress candidate Govindas Khonthoujam.

Manipur Governor Najma Heptulla on March 15 had appointed N Biren Singh as the first BJP Chief Minister of the state.

A three-day Budget session of the Assembly will begin tomorrow with the address of the Governor.