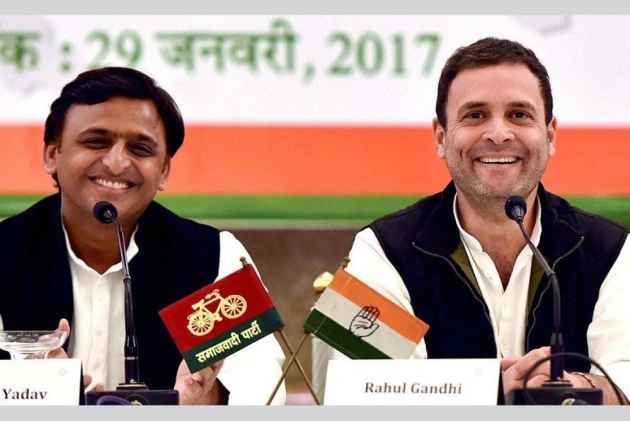 Akhilesh Yadav may have lost power in Uttar Pradesh, but he can claim that he is ruling the roost in BJP-ruled Gujarat's Chhota Udepur.

For, some 12,000 school bags distributed in government-run primary schools in this tribal-dominated district bear the picture of the Samajwadi Party leader.

The state education department has ordered an inquiry into how these bags ended up in Gujarat.

The school bags came with stickers of school enrolment drive of Gujarat government. However, beneath these stickers is a picture of a smiling Akhilesh Yadav.

The bags were distributed to students under the state government's `Shala Praveshotsav' programme, an annual drive to enrol students in class 1.

That they have Akhilesh's picture was first discovered by teachers at a school in Vasedi village when the stickers reading `Jilla Panchayat Shala Praveshotsav" came off.

District panchayat had procured 12,000 of these bags through an e-tender from a Surat-based company, said the district primary education officer Mahesh Prajapati.

Minister of state for education Bhupendrasinh Chudasama said an inquiry will be conducted and "action will be taken" against those responsible for this goof-up.

The bags were apparently manufactured for distribution in Uttar Pradesh when the Samajwadi Party was in power.

Opposition Congress took this opportunity to take a swipe at the BJP government.

"Instead of providing teachers, the government is distributing recycled bags of a former UP government by carrying out this drama of Shala Praveshotsav. It shows how serious the government is towards education," Gujarat Congress spokesman Manish Doshi said.