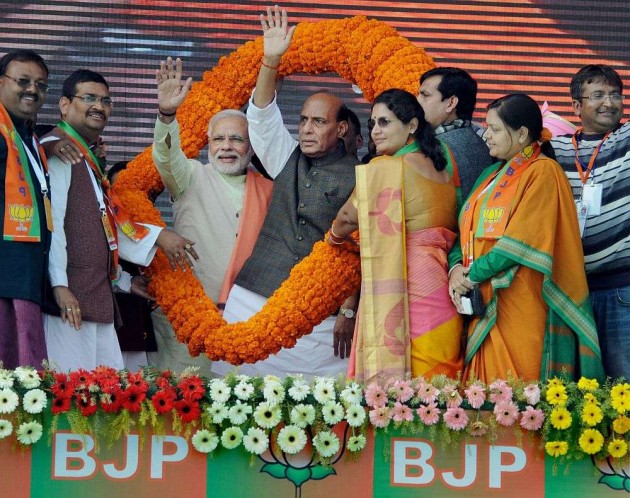 Under attack over Bihar leader Giriraj Singh's "back Narendra Modi or go to Pakistan" remark, an embarrassed BJP today distanced itself from the statement and tried to undo the damage with party chief Rajnath Singh saying it believes in politics of taking everybody along.

BJP spokesperson Nirmala Sitharaman said the party had nothing to do with Giriraj Singh's statement. Party sources said Giriraj has been conveyed the party's displeasure and asked to refrain from stoking any further row.

Senior Bihar BJP leader Sushil Kumar Modi termed the statement "irresponsible" and said the party does not approve of it.

"BJP doesn't approve of irresponsible statement given by Giriraj Singh," he tweeted as Giriraj's comments were denounced by parties with Congress and JD(U) moving the EC, demanding his arrest and action against BJP.

BJP doesn't approve of irresponsible statement given by Giriraj Singh.

Giriraj had said in an election meeting in Jharkhand yesterday that those opposing Modi will have to go to Pakistan after elections, leaving he BJP red-faced and inviting sharp criticism from rival parties who said his comments were aimed at Muslims.

In an apparent disapproval of the former Bihar minister's comments, Rajnath Singh said, "BJP believes in the politics of justice and humanity and taking everybody along".

Party sources admitted that Giriraj's comments have given other political parties a handle to go after it even as it has built its campaign around the developmental agenda.

He said the Election Commission should take note of Singh's comments and he should be sent to "jail".

"It's a serious issue. He is trying to provoke people and laying foundation of dividing the nation. The language he used is dangerous and divisive," K C Mittal of Congress Legal Cell said.

In a letter to the EC, Mittal claimed that the statement by Singh "had been calculatedly made, not only to exploit religious and communal feelings during operation of Model Code of Conduct but also to provoke public disorder."

Congress demanded that "exemplary" punishment should be imparted in this case and also sought action against the BJP, including derecognition of the party.

Congress and JD(U) said that Giriraj should be arrested and banned from campaigning. They also sought action against former BJP chief Nitin Gadkari, who shared the dias with Giriraj.

Singh had said, "Those opposing Narendra Modi are looking at Pakistan, and such people will have place in Pakistan and not in India".

Isolated in his party, Giriraj Singh tried to clarify his stand in a tweet.

"I maintain many Pakistani pro are constantly opposing namo. This nation belongs to Indian at heart else Pakistan always welcome anti India (sic)," he wrote, apparently giving a twist to his original statement.