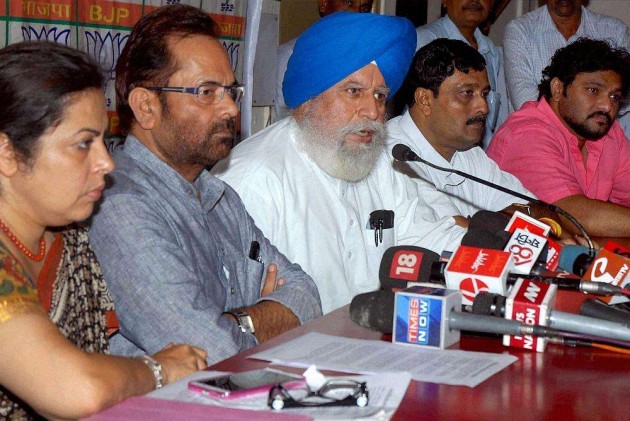 The NDA government at the Centre would not remain silent spectators if the ruling CPI(M) in Tripura does not stop an alleged wave of terror against BJP workers which began after the July 15 panchayat polls in the state, BJP MPs cautioned today.

"We visited the terror stricken villages of Tripura and found that unprecedented terror was let loose by CPI-M activists on BJP workers and supporters."

"We want to give a message that if the terror is not stopped forthwith, the NDA government will not remain a silent spectator," said BJP Vice President Surinder Singh Ahluwalia.

Ahluwalia led a three-member team of BJP MPs on a visit yesterday to the villages which have been allegedly affected by Left parties' terror.

"I also want to make it clear that the NDA government is not the UPA government, which ran with the support of CPI(M)," Ahluwalia told a press conference here today.

Tarun Vijay and Satyanarayan Jatia, too, were part of the BJP team which visited Dakshin Maheshpur village in Sipahijala district along with some others in Gomati and South Tripura districts.

"Even an 82-year-old woman was not spared. Her hand was fractured. Other women were threatened with mass rape if they supported BJP. I do not know where they have learnt of mass rape, may be they have learnt it from Trinamool Congress MP Tapas Pal," said Ahluwalia, the BJP MP from Darjeeling in West Bengal.

He alleged that unprecedented terror took place in Kathalia block, which falls in the constituency of Chief Minister Manik Sarkar.

"After Jyoti Basu, he (Sarkar) is the longest-serving chief minister in the country; we cannot expect such terror in his constituency. People have lost all democratic rights there and that is the reason why we will not meet him," he added.

He claimed that four state-level BJP leaders, including its president Sudhindra Dasgupta, were attacked at Daksin Maheshpur in Sipahijala district on July 22 while they were visiting the house of an activist who was allegedly attacked by CPI(M) workers.

"If the CPI(M) activists did not spare the BJP state chief, it can be imagined how intolerant and aggressive they are," he added.

The team said a report would be submitted to Prime Minister Narendra Modi and Union Home Minister Rajnath Singh and that the issue would be raised in Parliament.