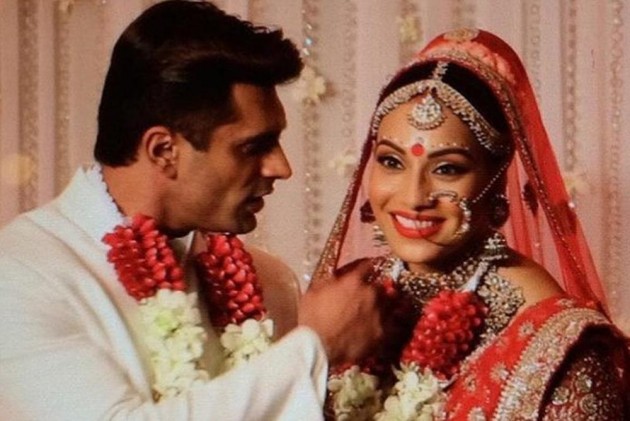 The wedding, which took place at a South Mumbai Hotel, was a private affair with family and close friends in attendance, including Bipasha's ex-boyfriend and now close friend Dino Morea, and hairstylist Sapna Bhavnani.

Bipasha ditched the typical Bengali bridal red-and- white saree for a red and golden lehenga-saree. The 37-year-old actress, however, completed her look with a topor and an elaborated makeup on forehead, typical of a Bengali bride.

Bipasha, whose husband is a Punjabi Sikh, wore chooda, which is a set of red and white bangles, worn especially by Punjabi brides.

The 34-year-old groom looked dashing in a white sherwani. Rather than coming on a ghodi, Karan arrived at the venue in a segway amid band-baaja celebration.

The couple followed the Bengali ritual of the bride covering her face with betel leaves and encircling the groom seven times, as he remains seated on the 'piri', a wooden seat.

The wedding will be followed by a white-themed reception and dinner, expected to be attended by the couple's Bollywood friends.

Earlier in the day, the couple had a haldi ceremony. The wedding celebrations began on April 28 with a pooja held as per Bengali rituals.

The couple began dating after starring in 2015 horror film "Alone". While this is Bipasha's first marriage, Karan has tied the knot for the third time. He was previously married to TV actresses Shraddha Nigam and Jennifer Winget.

The newly wed couple came out and posed for the shutter bugs. Bipasha and Karan looked very much in love as they posed hand-in-hand for the cameras. The couple thanked everyone for their love and support.