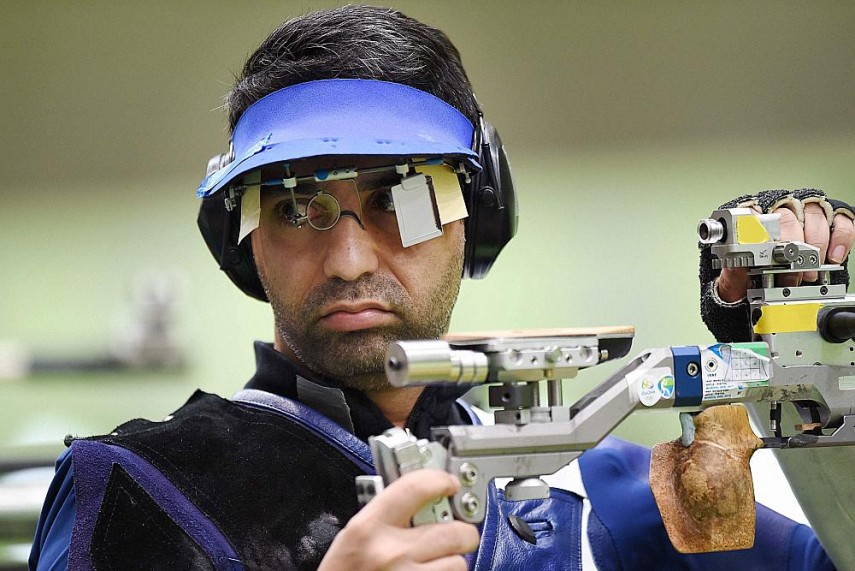 Abhinav Bindra lost a heart-stopping shoot-off and a great chance to provide India with their first medal of the Olympic Games on a day of missed opportunities for the country's contingent here.

In his fifth successive and final Olympic appearance, Bindra had to settle for a fourth place after eventual silver medallist Serhiy Kulish of Ukraine edged the Indian out 10.5-10 in the men's 10m air rifle shoot-off in the race to reach the medal round after the two were tied with the same score at the packed Olympic Shooting Centre in Deodoro.

It later emerged that the Zirakpur-based ace shooter, who had finished seventh in the qualifying round to make the cut for the finals, which his compatriot and London Olympics bronze medallist Gagan Narang failed to do, had shot with a malfunctioning gun.

Just before the start of the 10m air rifle qualification at 9am local time, Bindra -- gold medal winner in the same event in 2008 at Beijing -- fell down along with his gun from the chair and as a result the 'sight' of his rifle broke.

"This is something a shooter would not want before a game. He had specially made it for the Olympics to suit the lighting. Even after such meticulous detailing he fell short. But a shooter is conditioned to shoot even if the roof is falling. We got over it and started with our game," his coach Heinz Reinkemeier said later.

But India's only individual Olympic champion did not trot out any excuses, but only announced his retirement from the sport that had brought him world-wide attention and fame after he won the gold in the same event in Beijing in 2008, saying he's 'done' and will now convert his shooting range into a garden.

"I'm converting that into a vegetable garden. Don't you think I'm a serious person. Maybe the next time (Tokyo 2020), I will come as a journalist if anybody gives me a job," said Bindra.

Asked whether he may reconsider his decision, the 33-year-old said, "I'm done, I've announced my retirement, so there's no reconsideration."

To add to the woes on other fronts, the men's hockey team slumped to a 1-2 defeat to Germany by conceding a goal in the last few seconds left in the match on the third day of competitions.

There were setbacks elsewhere with men's trap shooting duo of Manavjit Singh Sandhu and Kynan Chenai not able to improve on their opening day's performance. They failed to qualify for the semifinals, signing off at 16th and 19th respectively on the second and final day of qualification.

Woman archer Laxmirani Majhi also put up a below-par show in the individual elimination round one and bowed out without a fight, losing 1-7 against Alexandra Longova of Slovakia. And as the day drew to a close, the women's hockey squad suffered a humiliating 0-3 loss to Britain.

The talking point of the day was undoubtedly Bindra's narrow miss to climb the podium again after eight years and join wrestler Sushil Kumar as two-time individual medallist.

Bindra's miss to climb the podium by a hair's breadth was akin to two other such misses in India's Olympic history, Milkha Singh's fourth place finish in men's 200m dash in 1960, Rome, and P T Usha's fourth-place show in the women's 400m hurdles final in 1984, Los Angeles.

Bindra, country's only individual Olympic gold medallist hardly showed emotion after losing the tension-filled shoot-off against Ukrainian marksman Kulish after the two were tied third at 163.8 in the race to reach the medal round.

The Indian did not show any emotion after the heart-breaking moment as he walked off after losing the one-shot elimination against Kulish who went on to win the silver medal with 204.6 behind gold medallist Niccolo Campriani (206.1) of Italy.

In fact, the Indian ace, in his fifth and last appearance in Olympics, was at one stage standing second in the eight-man final in which one shooter gets eliminated gradually leading to the final two men standing in the face-off for the gold after the 20th shot.

Meanwhile, Bindra's compatriot and London Olympic Games bronze winner Narang was way off the mark and missed out of the finals after finishing at a lowly 23rd position in the qualification round.

After picking up 73.7 points from his first seven shots, he fired a 10.8 to jump to the pole position with 105.3 points. But he lost the plot in subsequent rounds.

In men's hockey, India's perennial habit of conceding late goals continued to haunt them as reigning double Olympic champions Germany scored seconds from the final hooter to steal a 2-1 win in a thrilling Pool B match.

It was heart-break for the Indian fans as despite playing near perfect hockey for the major part of the match, India allowed the Germans to steal the win with just three seconds from full time.

After weathering India's attacking onslaught for the majority of the game, the Germans exerted tremendous pressure on the Indian defence in the final two minutes.

The Indian defence, which had a good match and stood firm all throughout, fumbled in the final seconds as Christopher Ruhr scored the winner for Germany with a deflection from close range to dash the PR Sreejesh-led side's hopes.

Earlier, Germany took the lead against the run of play through a field goal from Niklas Wellen (18th minute) before Rupinder Pal Singh (23rd) drew parity for India by converting his third penalty corner of the Games.

The win helped Germany keep their successful run intact against India since 1996. India last defeated Germany in Olympics way back in the Atlanta Games when they secured a 3-0 victory.

But despite the loss, the Indians can take heart from the fact that they dished out a much better display against Germany than what they managed in the recent past, which includes a 3-3 draw against a depleted German side in the Champions Trophy in London and 0-4 thrashing in Valencia just prior to the Olympics.

In women's hockey, India found themselves at the mercy of heavyweights Britain who cruised to a 3-0 result for a second successive win in a women's pool B encounter.

After a cautious first quarter, the English women who are the 2012 London bronze medallists, unleashed their fury by scoring within two minutes in the second quarter.

Giselle Ansley pierced through captain Sushila Chanu and goalkeeper Savita Punia to sound the board with a powerful drag-flick to break the deadlock in the 25th minute.

Before the Neil Hawgwood-coached team could settle down, it was Nicola White who deftly scored to make it 2-0.

The third quarter too went against India with Alex Danson making it 3-0 in the 33rd minute after some effortless dribbling.