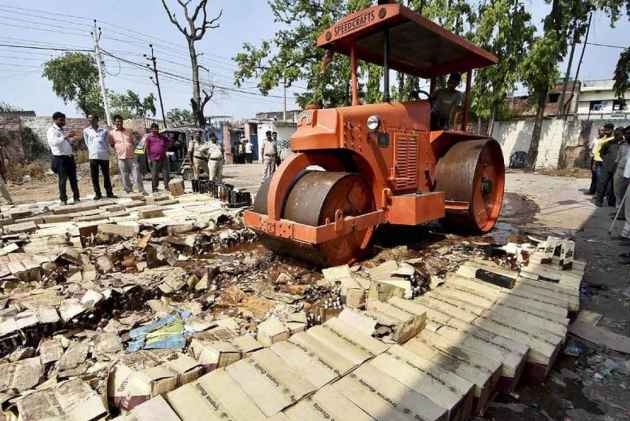 Liquor manufacturers from Bihar today alleged in the Supreme Court that the state government destroyed stocks of alcoholic beverages worth Rs five crore in a "vindictive and arbitrary" manner in the past three days.

The manufacturers told a bench headed by Chief Justice Dipak Misra that it was "unfair" on the part of the state to destroy these stock as they had informed Bihar's counsel about the application filed by them in the apex court in the matter.

The counsel for the manufacturers told the apex court that some states like Telangana and Maharashtra had given them the permit to dispose the stock of alcohol lying in Bihar in their states.

"Bihar put an arbitrary condition that trucks carrying liquor will have to be fitted with GPS so that it can be tracked whether the trucks are going outside the state," the lawyer told the bench, which also comprised Justices A M Khanwilkar and D Y Chandrachud.

The lawyer also argued that the plea filed by the manufacturers has virtually become infructous as hardly any stock was left in Bihar now.

"Our application was filed in the court. We have informed the Bihar government's counsel that the matter would be taken by this court today but from last Friday till today, they have destroyed stock worth Rs five crore. This is a vindictive and arbitrary action by the state," the counsel said.

Advocate Keshav Mohan, appearing for Bihar, countered the allegations and said the apex court had earlier refused to extend the July 31 deadline for disposing of old stock of over 2.80 lakh bottles of alcoholic beverages outside the state.

He said no stay was granted by the court on the manufacturers' plea.

The bench also told the counsel for manufacturers that it would not extend the deadline any further.

The apex court, however, asked Bihar government to file an affidavit responding to the allegations levelled by the manufacturers.

The apex court had on July 31 dismissed a plea of liquor manufacturers from Bihar to extend the deadline for disposing of the old stock outside the state.

The Nitish Kumar government in Bihar had imposed a ban on liquor in the state from April 1 last year.

On October 7, 2016, the apex court had stayed the operation of the Patna High Court judgement quashing state's law banning sale and consumption of all types of liquor, saying liquor and fundamental rights "do not go together".

The Bihar government has challenged the high court verdict of September 30, 2016.

However, after the law was set aside, the Bihar government had come out with a new law banning sale and consumption of liquor which was notified on October 2, 2016.

It had notified the Bihar Prohibition and Excise Act, 2016 to ensure that the ban on sale and consumption of alcoholic beverages including Indian Made Foreign Liquor as well spiced and domestic liquor, continued in the state.

Continue FREE with Ads Pay Rs. 1 to Read Without Ads
READ MORE IN:
Nitish Kumar National
Next Story : Haryana Govt Would Have Been Dismissed Had There Been Honesty In What PM Stated In Mann Ki Baat: Mayawati
Download the Outlook ​Magazines App. Six magazines, wherever you go! Play Store and App Store