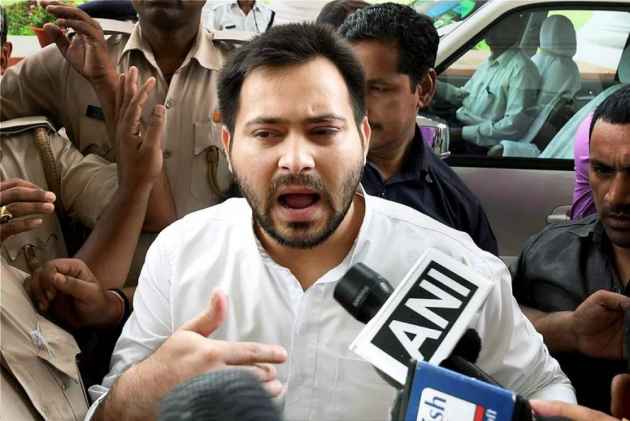 The acrimony between the JD(U) and the RJD seems to have reached a flashpoint with Bihar Deputy Chief Minister Tejashwi Prasad Yadav today skipping a government function, which was attended by Chief Minister Nitish Kumar.

The organisers initially covered the nameplate of Tejashwi, the special guest at the function whose seat was next to the chief minister's, but later removed it.

The function was held to mark the World Youth Skill Day.

The matter did not end here.

Kumar, who was sitting next to Labour Resources Minister and RJD leader Vijay Prakash, subsequently swapped his seat with JD(U) minister Rajiv Ranjan Singh, who was sitting on his right. This was seen as an attempt by the chief minister to maintain a distance with the RJD minister.

The episode was captured in still as well as video cameras of the electronic media to show how the acrimony between the two Grand Alliance partners was growing with every passing day in the wake of the CBI registering an FIR against Tejaswi and others in connection with a land-for-hotels scam case.

The developments on the dais at the newly-built Gyan Bhawan here came a day after RJD chief Lalu Prasad rejected the possibility of his son Tejaswi putting in his papers, a move seen as being dismissive of the JD(U) putting pressure on the deputy chief minister to quit.

When the reporters bombarded the chief minister with questions on Tejaswi skipping the function, he only smiled and extended skill day greetings to the scribes.

Labour Minister Vijay Prakash, who is from the RJD, said, "I do not know why Tejaswiji did not come to the function."

On Kumar "distancing" himself from Prakash, minister Jai Kumar Singh of the JD(U) claimed that the chief minister changed his seat to have a "better view" of the television screen.

With both the JD(U) and RJD hardening their stand, the rift within the Grand Alliance in the wake of the CBI lodging an FIR against Tejaswi, Lalu, Rabri Devi and five others, following raids in connection with the land-for-hotels case is festering on, posing a question mark on the survival of the coalition, in which the Congress is the third party.

The RJD and the Congress have called a joint meeting of their MLAs tomorrow to discuss the presidential poll strategy, while the JD(U) has convened a separate meeting of its MLAs at the chief minister's official residence.

Lalu, on his return from Ranchi late last night after appearing in courts in connection with fodder scam cases, had categorically said that Tejaswi would not resign and claimed that the case against him was "politically motivated".

On the JD(U) seeking a point-by-point explanation to the public on the charges against the deputy chief minister and the CBI lodging an FIR subsequently, Lalu had said they would let the people know everything in detail at an RJD rally on August 27.

He had also said that he would like to see the ruling coalition to grow from strength to strength.

JD(U) Deputy Leader in the Assembly Shyam Rajak, however said, "Everybody should maintain transparency in public life.... Otherwise, the people would show them the door."

On Lalu ruling out Tejaswi's resignation, Rajak, who was earlier in the RJD, said, "He (Lalu) is an elderly and experienced leader. I once again say that everybody in public life should maintain transparency."

JD(U) chief general secretary K C Tyagi told PTI that Kumar, at a party meeting on Tuesday, had dwelt on the importance of morality in politics and stressed on "politics of principles".

The chief minister had cited the examples of L K Advani and Sharad Yadav quitting following charge sheets against them in the Hawala case to emphasise that in case of an FIR or a charge sheet, the accused must come clean, he added.

Tyagi, however, said Kumar had not fixed any time-frame for Tejaswi to come clean.

On Tuesday, senior JD(U) leader Ramai Ram had said that a four-day time period, which expired today, was fixed for Tejaswi to give an explanation on the accusations.

Meanwhile, RJD spokesman Manoj Jha blamed the media for triggering the crisis in the Grand Alliance.

"After creating political turbulence, now a nameplate has been made a hero.... I give 100 out of 100 to the media," he said on Tejaswi skipping the function.