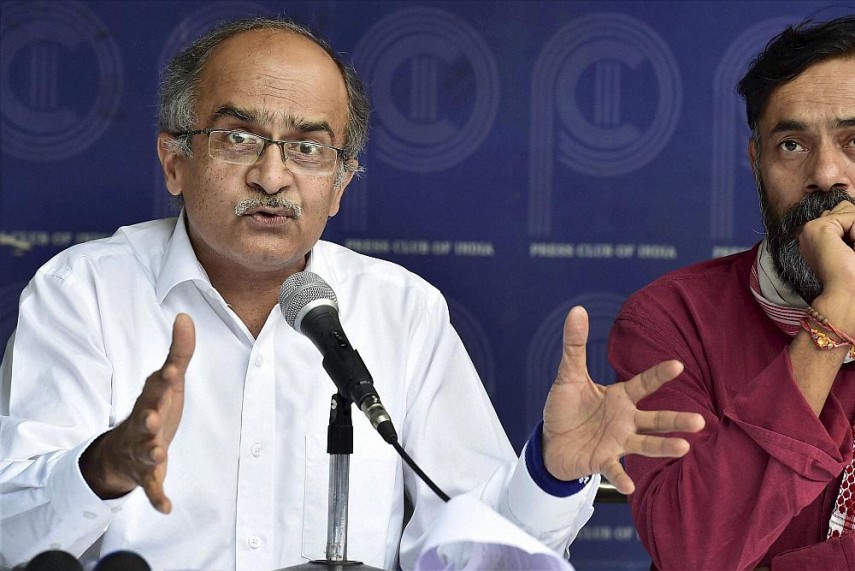 "It is not clear if it was a fake encounter. Most people have doubts about it," he said here.

Bhushan said Wani's background needs to be checked to ascertain why did he become a terrorist. "There were reports that once he (Wani) was going on a motorcycle with two others, including his elder brother, when the security forces stopped them and beat up his brother without any valid justification.

"What feeling would this have generated in a 15-year-old boy seeing his brother being brutally beaten up by securitymen?" he asked.

Bhushan said Kashmiris shouting for 'azadi' (independence) shows that they feel the army rule has been deliberately imposed upon them.

"They (Kashmiris) are unnecessarily beaten up, their women raped and there are many more such incidents," he said, adding, "No country can run for a long time by imposing army rule and if continued, it would only give rise to terrorism. Many countries are facing terrorism because of this."

The senior Supreme Court lawyer also said the decision of a lower court to order an FIR against Mohammad Akhlaq's family in connection with the Dadri mob-lynching case was not right.

"A probe should be conducted to find out who killed Akhlaq. It is not essential to find out if the meat in his fridge was of cow or buffalo as eating beef is not a crime in Uttar Pradesh. It is a crime only when a person kills a cow," said Bhushan.

Swaraj Abhiyan convenor and another former AAP leader Yogendra Yadav accused the RSS of flaring up communal tension in the country.

He said the BJP and RSS would once again try to create communal tension ahead of the 2017 Assembly elections in Uttar Pradesh on the lines of Muzaffarnagar before the 2014 general elections.

He accused Prime Minister Narendra Modi of lending "backdoor support" to controversial leaders such as Sadhvi Prachi and Yogi Adityanath who were known for spewing venom.

"When (Subramanian) Swamy speaks against Arun Jaitley, his ears are pulled by the Prime Minister which means, he is aware of his party colleagues' public statements. Swamy is stopped by him from crossing his limits, but when Sadhvi and Adityanath speak up, the Prime Minister does not utter a word," alleged Yadav.

Former AAP leaders, including Anand Kumar and others, were in the city to attend a two-day national convention, 'Umbrella for Peace', aimed at promoting peace and harmony and defeating the politics of hate-and-divide.