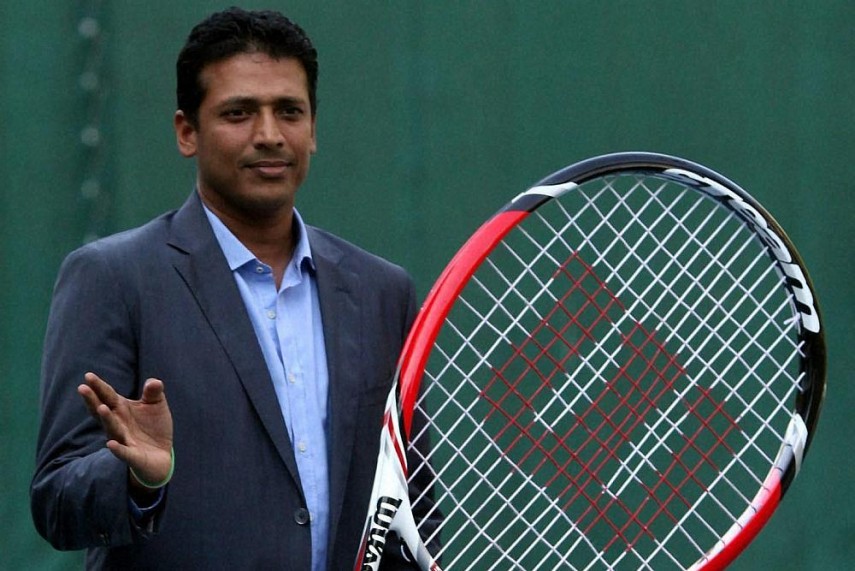 Mahesh Bhupathi, who is making a comeback to competitive tennis after an injury lay-off, won his first title in three years as he combined with Yuki Bhambri to clinch the Delhi Open while Saketh Myneni reached the singles final, here today.

Playing high quality tennis, Bhupathi and Bhambri won 6-3 4-6 10-5 against defending champions Saketh Myneni and Sanam Singh in the final that was a cut above the usual Challenger level matches.

Myneni could not win the doubles title but earlier in the day he was all class, winning his singles semifinal 6-3 6-2 against second seed Belgian Kimmer Coppejans.

He now has a chance to win his second Challenger level singles title, having won the first in October 2014 in Indore.

Bhupathi, who has hardly played in the last two years and got busy in conducting IPTL apart from nursing a knee injury, last won a title in March 2013, when he pocketed the Dubai ATP event with Michael Llodra.

Myneni had served superbly in his morning match but it was his serve that Bhupathi and Bhambri broke twice -- fifth and ninth -- to take the first set. Both times Myneni double faulted on breakpoints.

Bhupathi is 41 but he still has a stinging serve and his ground-strokes are getting better with each match. Sanam was exceptional of all the four players on the court when it came to returns. He hit winners from very difficult angles, often leaving Bhupathi and Bhambri just watch the ball pass them.

All four players lost serve at the start of the second set and it was 3-3 after trading breaks. When Bhupathi came out to serve the seventh game, Yuki made two volley errors and that cost them the game and Myneni served out the set in the 10th.

Bhupathi and Bhambri raced to a 8-2 lead in the Super-tie-breaker, taking the match away from the defending champions.

Bhupathi said he "enjoyed" playing with Yuki while the young Indian said it was a privilege for him to play alongside Bhupathi.

"Sometimes we forget simple basic things and Mahesh kept reminding me those. That's what I learnt. He continued to remind me that we have keep the ball in play and control the game from our side of the net," Yuki, who will next play in ATP 500 even in Dubai, said.

Earlier, Myneni demolished the challenge of Coppejans with remarkable ease. Serving better and better as the match progressed, 166th ranked Myneni made short work of his Belgian opponent in under an hour at the DLTA complex.

Coppejans put up some resistance initially but was once Myneni raised the level of his game the Belgian just fizzled, looking helpless and at mercy of the Indian.

Coppejans often made eye contact with his lone supporter, perhaps his compatriot during the points, as if asking what to do to counter Myneni.

Myneni hardly put a foot wrong. He served big, stroked with authority and was fluent in his stroke-making. He gave himself enough time to choose the shot he wanted to play and the placing.

Facing three breakpoints in the third game was the only blot in his performance today. He saved all those chances with superb service. Coppejans was rewarded for returning the powerful serves but he could not cope when Myneni accelerated.

Myneni just sailed after breaking his rival in the fourth game. He played seven service games after that and lost only four points in those games. Such was the quality of his service.

"I began well and when I upped the pace, he was rattled. Most of the Europeans play from behind the baseline and that's why I also used a few drop shots. I needed to draw him forward. It's just variation in the game and not something which I practice a lot," Myneni said.

Asked about the financial assistance that government has sanctioned for him, Myneni said,"that's awesome".

"I am looking forward to doing well, move my ranking up and play some big tournaments," he said.

He next faces third seed Frenchman Stephane Robert, who outplayed Flavio Cipolla 6-3 6-2 in the other semifinal.