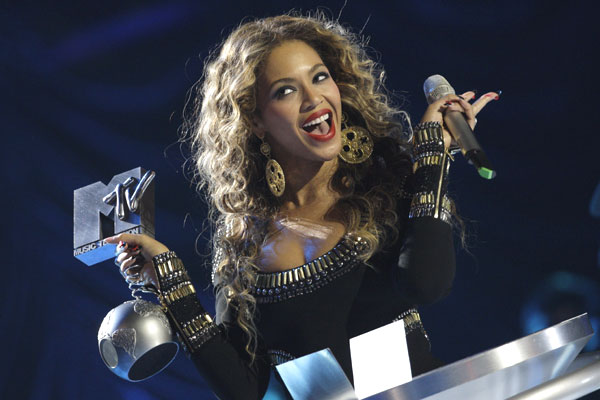 Beyonce has topped the winners list at this year's MTV Video Music Awards scoring a string of top honours, including video of the year for her politically charged song, "Formation" and best female video.

The 34-year-old superstar led all nominees heading into the show with 11 nods for her groundbreaking Lemonade album and short film.

And she quickly racked up the prizes, earning best choreography, best direction, best cinematography, and best editing for "Formation", which she performed as part of a show-stopping Lemonade medley.

"Formation" earned Beyonce the coveted video of the year title, which she dedicated to the residents of New Orleans, Louisiana, who have been struggling with severe flooding in recent weeks. Her best female video win was for "Hold Up".

With her multiple victories, she broke the record for most VMAs with 21 wins, surpassing the previous title holder Madonna, who has a total of 20 Moonman trophies.

Rihanna was another big winner at the VMAs, which she opened with the first of four performances during the New York show, singing hits "Only Girl" (In The World), "We Found Love", and "Where Have You Been."

She later returned to the Madison Square Garden stage to belt out tracks like "Work", "Needed Me", "Stay," and "Diamonds" before she was presented with the prestigious Michael Jackson Video Vanguard Award by her frequent collaborator and rumoured boyfriend Drake.

He delivered a heart-warming speech hailing the R&B beauty's achievements, declared he had been "in love" with her since he was 22, and honoured Rihanna as a "living, breathing legend in our industry".

They then shared a kiss on the cheek as Rihanna stepped up to accept the special Moonman award, which she celebrated as "such an amazing moment" in her career.

The Bajan star then went on to thank her longtime fans, saying: "My success, it started as my dream, but now my success is not my own; it's my family's, it's my fans, it's my country's, it's the Caribbean as a whole, it's women, it's black women.

"So many people feel like their little piece is such a major part of this puzzle and I have to thank you guys for supporting me, over and over..."

The Video Vanguard award wasn't her only win of the night  she also helped Calvin Harris claim the best male video title for their latest collaboration, "This Is What You Came For."

The group's number "All In My Head (Flex)" featuring Fetty Wap also won them song of summer.

Other performance highlights came from Ariana Grande and Nicki Minaj, Britney Spears and rapper G-Eazy, and Nick Jonas, who took over Manhattan's Tick Tock Diner for a rendition of Bacon with Ty Dolla Sign.