Bombay High Court gives the "benefit of doubt" to five accused in post-Godhra 'Best Bakery' case as witnesses failed to identify them, but upholds the life sentence awarded to four others 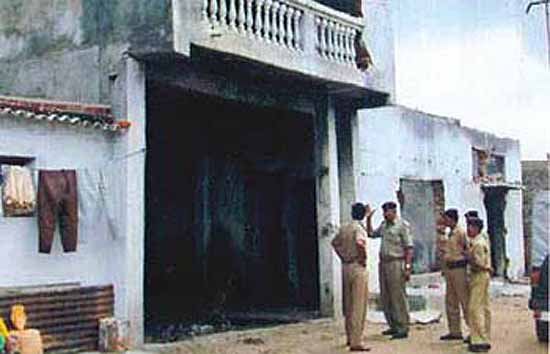 outlookindia.com
-0001-11-30T00:00:00+0553
Giving the "benefit of doubt" to five accused in Gujarat's post-Godhra 'Best Bakery' riots case as witnesses failed to identify them, the Bombay High Court today acquitted them but upheld the life sentence awarded to four others by the trial court.

A division bench of Justices V M Kanade and P D Kode passed its order on the appeals filed by nine accused challenging their conviction and life sentence handed down by the trial court in 2006 for their alleged involvement in the Best Bakery riots that claimed 14 lives and left several others wounded.

On March 1, 2002, two days after the carnage in which 59 kar sevaks were burnt alive in Sabarmati Express at Godhra, a mob had attacked the Best Bakery in Vadodara, looting and burning it down and killing 14 people.

The mob targeted the Muslims taking shelter inside, including the Sheikh family which ran the bakery. Three Hindu workers employed at the bakery were also killed.

The high court allowed the appeals filed by five of the nine accused - Rajubhai Baria, Pankaj Gosavi, Jagdish Rajput, Suresh alias Lalo Devjibhai Vasava, and Shailesh Tadvi, saying there was no evidence against them. The judges said none of the witnesses had attributed any role to them during the riots.

"These five accused should be given the benefit of doubt as no witness has identified them as part of the mob that attacked Best Bakery," the bench noted.

"The witnesses have identified these four accused as carrying swords, soda bottles and kerosene bottles and attacking them. They have survived through the skin of their teeth and escaped from the clutches of death. Considering the ordeal they have undergone, it is a miracle they survived," the court said.

"Normally, such witnesses would not implicate the accused. If they wanted to falsely implicate, then they would have taken the names of all the nine accused. But they have identified only these four," Justice Kanade said, adding even if there were certain contradictions in their statements those can be discarded.

Expressing displeasure over the tardy probe in the case, the court said, "There has been a serious lapse in the investigation and the manner in which statements of witnesses were recorded."

"The witnesses might have been in a state of shock and fear and hence not in a position to give full and proper statement. It is the duty of the police to take additional statements from them after being discharged from hospital," the court observed.

It further said after the Supreme Court referred the matter back for re-trial and re-investigation under section 173(8) of the Criminal Procedure Code it was the duty of the police to look into the matter again.

"The investigating officer has shown supreme over confidence in not going over the matter once again. It is possible that whoever was in charge of the investigation was confident that key prosecution witnesses like Zaheera Shaikh and others would not have turned hostile during trial," the court observed.

After all the accused in the case were acquitted by the trial court, one of the witnesses Zaheera Shaikh had moved the apex court against the judgement.

The Supreme Court had then ordered a re-investigation and re-trial during which Zaheera had turned hostile. Another witness Yasmeen Shaikh had, however, testified against the accused but, in a twist, she later accused activist Teesta Seetalvad of "luring" her into giving false statements against the accused.

The high court directed that the four convicted accused be shifted to a jail in Gujarat and the remaining five released forthwith. All nine were housed in a jail in Maharashtra as the trial was transferred to a special court in Mumbai by the Supreme Court due to security reasons.

On allegations that Setalvad had tutored witnesses, Justice Kanade said, "Regarding the four injured eyewitnesses it cannot be said that they have been tutored by anyone including Teesta Setalvad. It would not be proper to attribute any motive to her."

The bench has however kept two applications - one filed by a key witness Yasmeen Shaikh and another by Teesta Setalvad -open for arguments.

Yasmeen had filed a petition in the High Court stating that she was "lured and misguided" by social activist Setalvad into giving false testimony against the 17 accused. She sought her evidence to be recorded again at the stage of appeal. Setalvad filed an intervening application asking the court to hear her views while deciding the appeals.

The court had, however, said it would first decide the appeals filed by those convicted by the trial court before hearing the applications of Shaikh and Setalvad.

The high court had commenced day-to-day hearing on the appeals from March this year and had reserved its judgement for July 3.

Of the 17 accused, nine were convicted and sentenced to life by a special court in Mumbai in 2006. Those convicted had moved the High Court against the verdict.

Meanwhile, relatives of the five accused, who were acquitted by the High Court, welcomed the judgement.

Ritu Gosavi, a Vadodara resident and relative of Pankaj Gosavi, who has been let-off, said "our prayers have been answered. Our faith in God has strengthened."

"The family members of the convicts had been living a miserable life and nobody came forward to look after them," she said.

Advocate Rajendra Trivedi, who had defended the accused in the local court during the trial, also hailed the verdict.