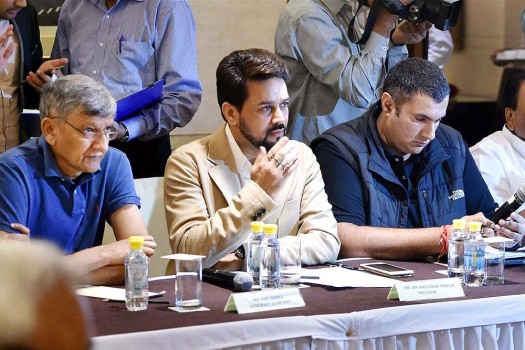 Given the marching orders by Supreme Court, the sacked duo of BCCI President Anurag Thakur and Secretary Ajay Shirke today said they will abide by the directive even though they made their skepticism with the verdict quite apparent.

Thakur and Shirke were told to quit office with immediate effect by an irate Supreme Court, which held that it was mandatory for the BCCI to implement the Lodha Committee recommendations on administrative reforms in toto.

The court ruled that, for the time being, the senior-most vice President of the BCCI will act as the stand-in President and the joint Secretary would carry out the Secretary's functions. DDCA Vice President CK Khanna, 64, is among the seniormost VPs in the Board right now.

The apex court also issued a contempt notice to Thakur seeking his response as to why he should not be held liable for obstructing the implementation of the Lodha reforms, which were first made mandatory on July 18 last year.

Thakur took a subtle dig at the order saying that if the apex court feels the cricketing body will do well under the guidance of retired judges, "I wish them all the best".

"For me it was not a personal battle, it was a battle for the autonomy of the sports body. I respect Supreme Court as any citizen should. If Supreme Court judges feel that BCCI could do better under retired judges, I wish them all the best. I am sure Indian cricket will do well under their guidance," said Thakur.

He reacted to the Supreme Court order by putting up a video clip on social media.

"My commitment to the best of Indian cricket and autonomy of sports will always remain," he said.

Thakur was BCCI joint secretary and secretary before being elected president in May 2016. The BJP MP has also served as Himachal cricket boss for more than a decade.

"I had the honour of serving Indian cricket. Over the years, Indian cricket saw its best in terms of administration and development of the game. BCCI is the best managed sports organisation in the country with defined procedures. India has the best infrastructure built and maintained by state association with help of BCCI. India has more quality players than anywhere in the world.

Shirke, on the other hand, said he is "absolutely fine" with the Supreme Court order but hoped that the Board does not lose its international standing owing to the administrative upheaval here.

"I have no reaction to that (to his sacking). If that is the Supreme Court order, I cease to be secretary. It cannot get any simpler than that. My role in BCCI is over," said Shirke shortly after Supreme Court removed him and president Anurag Thakur as the office-bearers of the BCCI.

The two faced the wrath of the Supreme Court after BCCI failed to implement the Lodha panel reforms under their leadership.