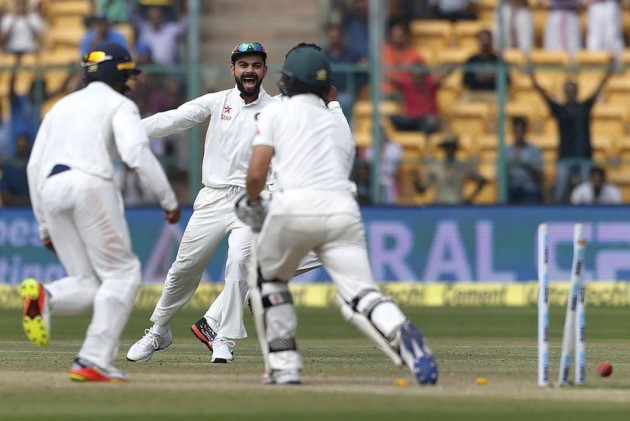 The Virat Kohli-Steve Smith clash on the controversial DRS call today triggered a full blown verbal war between the Cricket Boards of India and Australia with both aggressively backing their respective players.

A day after Indian captain Virat Kohli lambasted the Australian team and just about stopped short of calling Smith a cheat, the two Boards waded into the controversy by coming out with statements backing their teams.

The BCCI went a step further and requested the ICC to take cognisance of the matter.

"BCCI has requested the ICC to take cognizance of the fact that the Australian skipper Mr. Steve Smith in his press conference admitted to a 'brain fade' at that moment. BCCI sincerely hopes that the rest of the matches are played in the true spirit of cricket," the BCCI said in a statement.

The drama was triggered by Smith getting caught by umpires while glancing at the dressing room before taking a DRS call during the second Test, which ended in India's favour yesterday.

Smith tried to play down the controversy by calling it a "brain fade" but that did not stop the barrage of criticism that came his way for his on-field actions.

However, he got the backing of his Board with Cricket Australia CEO James Sutherland rejecting allegations questioning Smith's integrity.

"I find the allegations questioning the integrity of Steve Smith, the Australian Team and the dressing room, outrageous," Sutherland was quoted in a statement.

"Steve is an outstanding cricketer and person, and role model to many aspiring cricketers and we have every faith that there was no ill-intent in his actions.

"We reject any commentary that suggests our integrity was brought into disrepute or that systemic unfair tactics are used, and stand by Steve and the Australian Cricketers who are proudly representing our country," he added.

Amid the drama, batsman Peter Handscomb sought to take the blame for the contentious call on himself, claiming that it was he who asked Smith to seek a clue from dressing room after being adjudged leg-before off Umesh Yadav.

"I referred smudga to look at the box... My fault and was unaware of the rule. Shouldn't take anything away from what was an amazing game!," Handscomb wrote on his official twitter page. MORE Smith also got the backing of coach Darren Lehmann, who echoed the sentiment expressed by CA. Lehmann said Kohli's allegation of repeated dressing room referrals by Australian players was merely his personal opinion.

"Never, ever, ever. Very surprised to hear that, but it's their opinion," said Lehmann.

"He (Kohli) has his opinion and we have ours, but at the end of the day we play the game the right way. We've changed the way we want to play, we've obviously changed the side and we're a younger side so I'm pretty pleased with the way we do things now.

"We've never done any of that, so we'll just get on with the next game," said the coach further.

In a fiery post-match press conference yesterday, Kohli had stated that he had twice seen Australians seeking help from the dressing room for DRS referrals.

Lehmann praised his team for not responding aggressively to Kohli's charge.

"Gone are the days when we used to be probably the other way, and I was part of that as an Australian side. The young guys, the way they want to portray themselves and encourage people to play the game and enjoy the game has been exceptional," he said.

"So I'm really proud of the way they went about it this game, even though we lost."

Waugh said Smith's explanation should be taken on face value but admitted that he would not exactly be proud of his actions.

"It was a fantastic Test match. It's a shame we are focussing on one incident. I would go with what Steve has said. I would take him on face value. The best part was umpires stepped in and stopped at then and there. Looking back Smith will be embarrassed and must have learnt a lesson," Waugh told mediapersons at a promotional event today.

However, Waugh too wanted the ICC to intervene and bring a closure to the issue.

"Someone from ICC needs to look into the matter and bring it to a finality. Look we need to move on. Probably he would be cautioned. It was a high intensity game," said Waugh.

Former BCCI President Anurag Thakur was not to be left behind either and he backed Kohli's tough stance on the matter.

"For years Australian ckt. Team have been bullying world ckt. Not any more. This time they are caught on camera and still denying," he tweeted.

"If @stevesmith49 is so naive that he didn't know what to do then should he be leading. Is Steve Smith good example of leadership. @BCCI....Extremely proud of #TeamIndia (@BCCI ) and @imVkohli who reported the matter to umpires. We must stand by our captain and support him," he added.