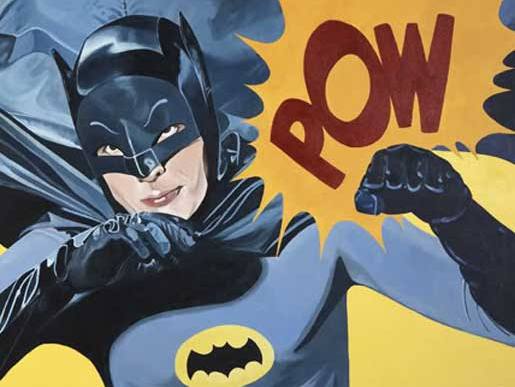 Ka-pow! Batman is celebrating his 75th birthday this month with a series of comic-book, video-game and other events putting Gotham's famed Caped Crusader firmly back in the spotlight.

July 23 is officially Batman Day, and to mark the occasion in Hollywood, Warner Bros has organized a VIP studio tour including Batmobiles, masks, capes and other souvenirs of the Dark Knight.

"The world has no heroes... Batman gives you some hope and some faith," actor Danny DeVito, who played the caped one's nemesis the Penguin in the 1992 movie Batman Returns," told AFP in an interview.

Batman was born in May 1939, the creation of artist Bob Kane and writer Bill Finger, who were tasked by DC Comics with creating a new superhero in the wake of the success of Superman.

Unlike Superman, the new hero was given a dark side, and rapidly became a global pop culture icon, decades before the latest generation of superheroes like Captain America, Spiderman or Iron Man took to the big screen.

While Superman represents the archetypal hero with super-human powers, a brightly colored costume and appears in daylight, Bruce Wayne is a wealthy tycoon who changes into a mask and dark cape to bring justice to Gotham City.

DeVito said Batman's success stems from the lack of faith in the political and business class. "We look around at us, our leaders and the young people we are supposed to look to.

"There's really nobody you can have faith in," he said.

Bruce Wayne has remained popular through the decades thanks to the varied formats, from the 1960s TV series Batman with Adam West and Burt Ward, the success of which re-kindled sales of the original comic books.

"The passion of fans is very, very high, it's a way of life," said Jim Lee, artist and co-editor of DC Entertainment, the parent company of DC Comics, at the presentation of the Warner Bros exhibition.

"People tattoo images of Batman all over the body. It's amazing to see how Batman has become a huge part of pop culture, he has really captivated the imagination of the entire world," he said.

Film versions have kept the Batman brand alive, including the Dark Knight trilogy by Christopher Nolan in 2005, 2008 and 2012, with Briton Christian Bale in the brooding title role.

In terms of merchandise, apart from the usual T-shirts, baseball caps and posters, Batman video games are apparently all the rage.

In 2016, Batman will be back on the big screen, for the first time along with Superman, in Batman v Superman: Dawn of Justice. Ben Affleck will play the caped crusader.

Continue FREE with Ads Pay Rs. 1 to Read Without Ads
READ MORE IN:
Arts & Entertainment
Next Story : Man Arrested for Raping Woman on the Pretext of Marriage
Download the Outlook ​Magazines App. Six magazines, wherever you go! Play Store and App Store