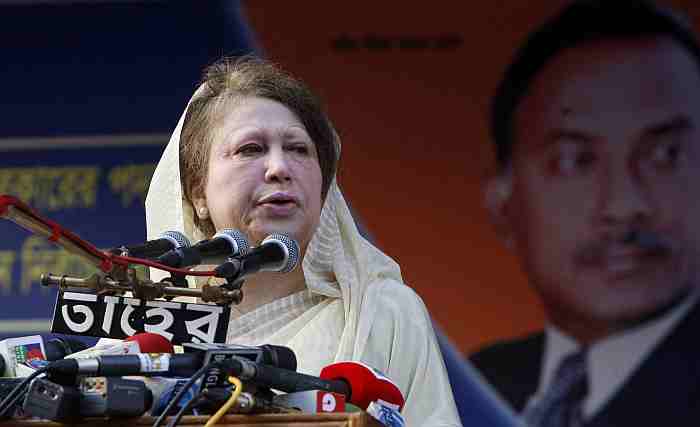 The 'fugitive' eldest son of Bangladesh's opposition leader and former premier Khaleda Zia was today sentenced to seven years in prison by a court here for laundering nearly USD 2.5 million, overturning a lower court's decision to acquit him in the high-profile graft case.

Tarique Rahman, 48, who is senior vice president of Bangladesh Nationalist Party (BNP), was sentenced by the two-member bench of the High Court for siphoning off the money to Singapore between 2003 and 2007 when the party-led four-party righting alliance government was in power.

"He (Rahman) has been tried in absentia as he did not appear despite being summoned...The court earlier declared him fugitive" a court official told reporters after the verdict.

Rahman, who has been living in London since 2007, was charged under Money Laundering Act. The court also slapped Taka 200 million fine on him.

In a surprise verdict, a Dhaka court on November 17, 2013 had acquitted Rahman of the graft charge but handed down seven years of imprisonment and fined Taka 400 million to his friend and business partner Giasuddin Al Mamun in the same case.

The High Court, however, upheld Mamun's jail term but lowered the amount of fine to Taka 200 million, an equal amount of penalty slapped on Rahman.

BNP earlier rejoiced the lower court's verdict but the judge of the court, who retired within few days after the verdict came under the scanner of Anti-Corruption Commission (ACC) as he reportedly left the country soon after.

According to one of the pending charges, Rahman allegedly masterminded a fatal grenade attack in 2004 on a rally of the then main opposition and now ruling Awami League killing 24 people.

It is unclear if Rahman has sought an asylum in the UK as the British authorities earlier declined to make any public statement on the issue calling it a "personal matter of an individual".

The Anti-Corruption Commission brought the money laundering charge against Rahman during the past military- backed interim government which spearheaded a massive anti-graft campaign under the State of Emergency from 2006 to 2008 when Rahman was put behind the bar.

He was allowed to take an overseas tour for medical treatment under a Supreme Court order but he preferred to stay back in London as the subsequent general election installed Awami League to power with three fourths majority.

Continue FREE with Ads Pay Rs. 1 to Read Without Ads
READ MORE IN:
Khaleda Zia International
Next Story : US Has Nothing to Fear From Majority of Muslims: Trump Aide
Download the Outlook ​Magazines App. Six magazines, wherever you go! Play Store and App Store