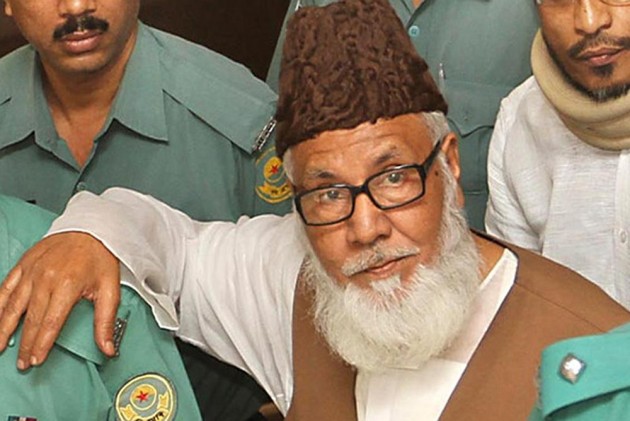 Top leader of Bangladesh's fundamentalist Jamaat-e-Islami Motiur Rahman Nizami today faced a major setback after the Supreme Court rejected his final plea to review his death sentence it earlier handed down over war crimes during the 1971 Liberation War with Pakistan.

"Dismissed," said top judge, who is the first Hindu to occupy the post in the Muslim-majority country, about the final appeal of 72-year-old Nizami, convicted of murder, rape and orchestrating the killing of top intellectuals.

Court officials said the details of the order would be issued later in writing.

Tight security was enforced in and around the Supreme Court complex ahead of the verdict, though unlike the trial court, the apex court procedures did not require Nizami's presence during the delivery of the judgement.

The Jamaat chief is now kept at a special cell for death row convicts at suburban Kashimpur Central Jail.

Today's final verdict comes two days after the bench wrapped up hearing Nizami's petition, seeking a review of the top court's own previous judgement that had confirmed his death sentence.

Immediately after the verdict, Jamaat issued a statement calling Nizami a "victim of state-sponsored conspiracy" and called a day-long nationwide strike on May 8.

"The government has taken a plan to kill Maulana Nizami in the name of trial of crimes against humanity as part of its political vengeance," the statement said.

The Supreme Court's decision clears the final legal hurdle for the government to hang the Jamaat-e-Islami chief, who is now left with the only option to seek presidential mercy.

President Abdul Hamid, however, has earlier rejected two such prayers by 1971 war crimes convicts, including Nizami's top aide then, who were subsequently executed late last year.

Jamaat was opposed to Bangladesh's 1971 independence from Pakistan and sided with Pakistani troops in carrying out the atrocities during the Liberation War.

At the time, Nizami was the chief of the party's student wing as well as the notorious Al-Badr militia force, manned by Jamaat activists. He was a minister in the past BNP-led four- party alliance government with his party being its crucial ally.

Nizami is one of the last remaining top perpetrators of crimes against humanity as Prime Minister Sheikh Hasina's government initiated a process to try the 1971 war criminals.

Attorney general Mahbubey Alam told reporters after the judgement: "now there exists no bar in executing the verdict, once the court issues it in writing, which is expected soon."

Several hundred activists of Ganojagaran Mancha, which was waging a campaign for the maximum punishment for war criminals, rallied at Shahbagh area in the capital to rejoice the verdict while 1971 members of 1971 victim families appeared in private TV channels to express their satisfaction.

During the over three-hour review hearing on Tuesday, the court heard both Alam and Nizami's chief counsel Khandaker Mahbub Hossain.

In the apex court, the chief defence counsel appealed to the court to reduce his client's punishment, saying Nizami was not "directly involved" in mass murders, arsons and rapes despite being the Al-Badr chief.

Alam opposed the argument, saying Jamaat had sided with Pakistani troops in carrying out the atrocities during the Liberation War and as the Al-Badr chief, Nizami could not avoid the responsibility.

Bangladesh's International Crimes Tribunal (ICT-BD) originally sentenced Nizami to death on October 29, 2014 and after an appeal hearing the apex court found the punishment appropriate for him as it pronounced its judgement on January 6 this year.

The prison authorities served Nizami the death warrant on March 16 as the apex court decision reached them in writing through the ICT-BD following the Jamaat chief sought review of the Supreme Court judgement, exhausting his last legal opportunity to overturn the verdict.

"It would be a failure of justice, unless he is handed down the death penalty," the ICT-BD commented as it handed down Nizami the capital punishment in October 2014, convicting him of "superior responsibility" as the chief of the infamous Al-Badr militia forces in 1971.

The so-called elite militia force is blamed for running a systematic campaign to massacre a large number of top Bengali intelligentsia just ahead of Bangladesh's December 16, 1971 victory.

But Nizami was particularly found guilty of systematic killings of more than 450 people alone in his own village home in northwestern Pabna, siding with the Pakistani troops.

Mujaheed, who was also Nizami's top aide then, was executed on November 22 last year along with Chowdhury of BNP, currently the key-opposition outside parliament. They were hanged immediately after President Hamid rejected their mercy petitions.

Bangladesh has so far executed four war crimes convicts since the belated process to expose to trial the top Bengali perpetrators of 1971 atrocities in line with the 2008 electoral commitment of the incumbent government.

Two others - former Jamaat chief Ghulam Azam and ex-BNP minister Abdul Alim - earlier were handed down "imprisonment until death" penalty instead of capital punishment on grounds of their old age as they exceeded 80. They subsequently died in the prison cells of a specialised state-run hospital due to old age ailments.