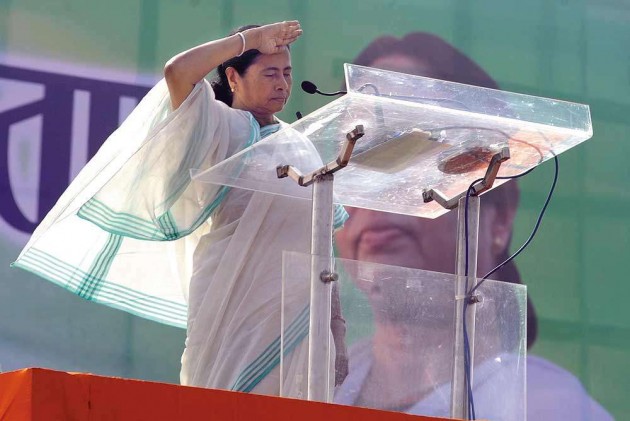 Mamata's nephew Abhishek Banerjee would contest from Diamond Harbour seat in South 24-Parganas district. The seat was held by Somen Mitra, a former Congress state unit chief who had joined TMC in 2009 only to quit recently.

The TMC chief said that she had chosen "candidates from all walks of life to give a proper representation to Bengal".

TMC, which had shared seats in alliance with Congress in the 2009 elections, had fought from 27 seats and the latter from 14 seats. It had left one seat to SUCI, a Leftist party opposed to the CPI(M).

Justifying her stand to fight the elections alone, she said, "People have wanted us to go it alone. We are happy that we won't have to see the political faces of the corrupt."

However, she also mentioned that in some other large states like Gujarat and Tamil Nadu, elections would be held in one phase only.

"We respect the Election Commission. But we have seen that in Gujarat election is in one phase while in Tamil Nadu also it will be held in one phase," she said adding "thanks to the EC, it will give us time to campaign."

While Dr Sugata Bose, a Harvard University professor of history, has replaced rebel MP Kabir Suman from Jadavpur seat, the MPs from Bongaon and Ranaghat have been replaced owing to health reasons.

The seat is at present held by Deepa Dasmunshi, wife of Priya Ranjan, who is a Union Minister of State in the UPA-2 Cabinet and a bitter critic of Mamata Banerjee.

Dinesh Trivedi, who had been unceremoniously removed as Railway Minister by Banerjee after he went against the party line and hiked passenger fares in the 2012 Railway Budget, has been renominated from Barrackpur constituency.

Trinamool Congress, which had won 19 of the 42 seats in 2009 elections, has fielded 11 women candidates this time.

"Of the 42 seats in Bengal, we are fielding 26.19 per cent women candidates and seven candidates from Minority community will fight under the Trinamool banner," Banerjee said.

Yesteryear film star Sandhya Roy and Dev have been put up in Medinipur and Ghatal constituencies respectively.

In a bid to widen her party's base outside Bengal, Banerjee announced names of candidates for the two Lok Sabha constituencies in Tripura, a Left bastion, and other states like Jharkhand and Manipur.

While Ratan Chakraborti was fielded from Tripura West, Vikuram Reang would fight from Tripura East, the TMC supremo announced.

Two sitting MLAs from Jharkhand, who a few days back joined the TMC, were made candidates for Lok Sabha seats in the state.

While Bandhu Tirkey would fight from Ranchi, Chamra Linda would be the party's candidate from Lohardaga.

In Manipur, Kim Gangte is the TMC candidate from Manipur Hills, while Sarangthem Manobi Singh would fight from Manipur Valley.

Banerjee said, "The party will put up candidates in some other states as well and the names will be announced in due course."

She also announced the names of TMC candidates for bye-polls to five Assembly seats in West Bengal.

Following is the list of Trinamool Congress candidates for the 42 Lok Sabha seats in West Bengal: