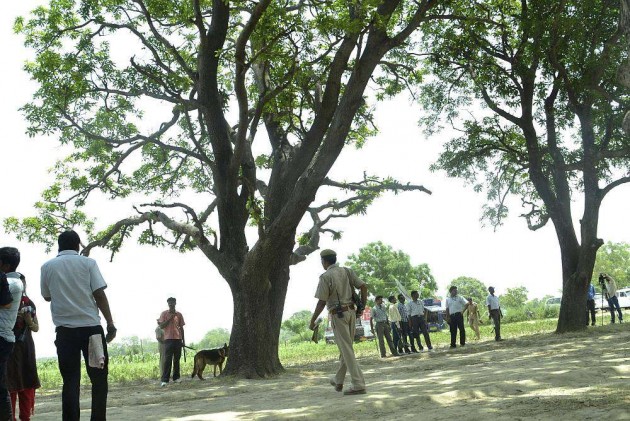 The Baduan alleged rape and murder case has become murkier with families of the two victims apparently telling the CBI that the police FIR was filed on the basis of wrong statements given by an uncle of the girls.

CBI, which began its investigation into the case after it became a political issue, found that Uttar Pradesh Police had not done due diligence before naming people as accused in the FIR, official sources said.

The FIR was filed on the sequence of events provided by Nazru, uncle of the two girls whose bodies were found hanging from a tree in Badaun in last week of May, the sources said.

A polygraph test of families of the girls and Nazru were conducted by the CBI and it was found in the report that there were "inconsistencies in their statements" on key questions related to the case.

Finally, the family as well as Nazru told the CBI that the main accused Pappu, named in the Uttar Pradesh Police FIR, had not taken the two girls at gunpoint but rather fled when he was spotted with the girls by Nazru.

It was on the basis of Nazru's statement that the Uttar Pradesh Police had registered a case and arrested five people including two of its own constables. It was alleged that the two cousins were raped before being murdered.

The two girls, aged 14 and 15, went missing from their house on the night of May 27 and their bodies were found hanging from a tree in in Ushait area the next day.

According to the events now, Nazru found the girls with Pappu following which there was a scuffle between the two men. After this Pappu fled to his home, while the girls fled in another direction.

This has been corroborated by the field investigation by the CBI team as well, the sources said.

The next day, when the bodies were found hanging from a tree, Nazru claimed before the police that he had seen Pappu taking the away the girls at gun-point.

As the probe continues, Nazru's role has come under scanner as he is alleged to be lying consistently before CBI.

During his lie detector test, Nazru had admitted he had a mobile phone. He had earlier denied possession of a phone.

The mobile phone was recovered from him and sent for forensic examination to ascertain whether any data had been deleted from the instrument, CBI said.

Forensic evidence based on DNA tests conducted by CBI has ruled out any sexual assault on the two teenagers prompting the agency not to file a charge sheet in the case against the five accused who had cleared the lie detector test.

CBI had taken into custody five accused-- Pappu, Awadhesh and Urvesh Yadav (brothers) and constables Chhatrapal Yadav and Sarvesh Yadav-- in the case. All of them were arrested by Uttar Pradesh Police.

The incident had sparked a national outrage with the Samajwadi Party government in the state coming under fire on the issue of law-and-order situation.

CBI had also alleged that the post-mortem conducted by a local doctor had discrepancies.