Badaun Gang Rape: Two of the Accused Confess to Crime 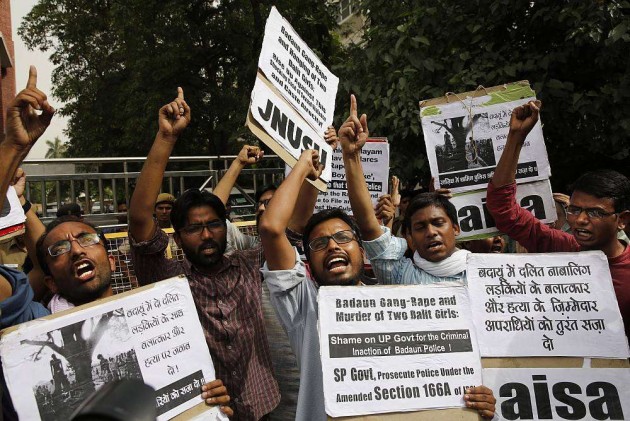 Two of the five men arrested in the case of gangrape and murder of two teenaged cousins in Uttar Pradesh have confessed to the crime, police claimed today, even as the SP government faced more criticism over the incident.

BSP chief Mayawati also joined the politicians who made a beeline to Katra village where the two dalit cousin sisters lived and stepped up attack on Akhilesh Yadav government alleging it was perpetrating "jungle raj" and there was an attempt to put the case on the back burner.

The UP police asserted it was in the process of collecting "concrete" evidence to nail the culprits in court in the case which has sparked a nationwide outrage.

"Two of the accused, who have been arrested in connection with this incident, have confessed to their crime during interrogation," Superintendent of Police Atul Saxena told PTI, but refused to identify the men.

The FIR was registered against seven persons, including two unnamed men who are absconding. Saxena said that in such cases the accused usually resile from their statements in court so they will ensure that there is evidence which can stand judicial scrutiny.

"In most of the cases the accused change their version before the court.... But instead of depending upon their confession we will support the case with concrete evidence," the SP said.

The two girls, aged 14 and 15 years, were allegedly gangraped and murdered with their bodies found hanging from a mango tree in a village in Ushaitarea here.

The girls went missing on May 27 and their bodies were found on May 28 in the district.Badaun is 300 km from Lucknow.

Besides Mayawati, local SP MP Dharmendra Yadav also reached Katra village where he faced the anger of the inconsolable parents who have alleged that the police did not take prompt action in the case because of their caste. Yesterday, Congress leader Rahul Gandhi met the victims' family.

Mayawati, who met the family of the two cousins, announced Rs 5 lakh each to the victims' kin from the party fund, claiming that though they have refused the government compensation, they would accept her assistance.

"The family members told me that the local MP came this morning and offered compensation and all help, but they refused. They told that whatever I will give them, they will accept gladly," she said after meeting the family.

"There was an attempt to put the case on the back burner and when I came to know this, I immediately decided to come to Badaun," she added.