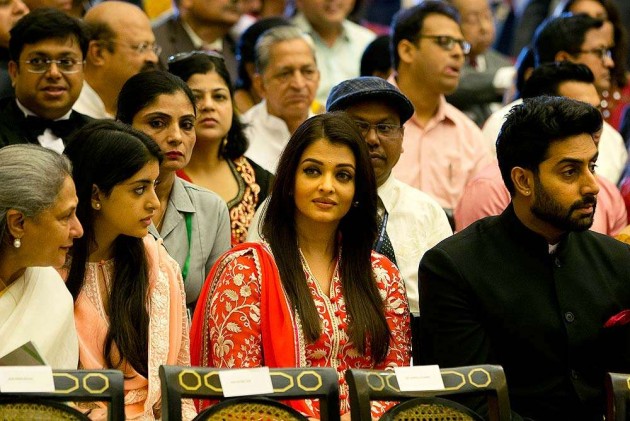 The Bachchans were the centre of attraction at the civil investiture ceremony held at Rashtrapati Bhavan here where megastar Amitabh Bachchan was bestowed with country's second highest civilian award Padma Vibhushan amidst loudest and longest applause.

Much before the function started, senior Ministers like Rajnath Singh, Arun Jaitley and Ravi Shankar Prasad went to the seat of the 72-year-old versatile actor to greet him, who was dressed in a black 'bandhgala' suit.

Abhishek, who was shooting in Dubai and landed early this morning, was wearing a black 'bandhgala' suit, his wife Aishwarya was dressed in an orange colour embroidered traditional salwar suit.

The Bollywood megastar received the loudest and longest applause from the audience, that included Union Ministers, top civil and defence officials and family members of 50 prominent personalities who were given the Padma awards today.

The family was mobbed by the audience when they went to attend the customary tea party hosted by the President. However, the Rashtrapati Bhavan guards surrounded the family and did not allow most of the people, including journalists, to interact with them.

Amitabh obliged a few by allowing himself to be photographed with them.

Prime Minister Narendra Modi too interacted with the Bachchan family for a brief period.

In a blog, Amitabh wrote last night that the family was uniting for the investiture ceremony.

"Abhishek, who is shooting in Dubai, shall come in early morning tomorrow. Aishwarya and Aaradhya have just landed from Mumbai. Navya and Agastya have come home from London school, for their Easter break and all shall be present to witness this moment ..And of course Nikhil and Shweta and Jaya...All shall be with me in that historic hall...," he wrote last night.

Amitabh also wrote that he had been to the Darbar hall on many occasions in the past -- when his father and renowned Hindi poet Harivansh Rai Bachchan and his own Padma Shri and Padma Bhushan awards.

"Then we had moved inside to the Grand Hall with its incredible ornate ceiling work, for the other Padma Awards for Jaya and Aishwarya," he wrote.