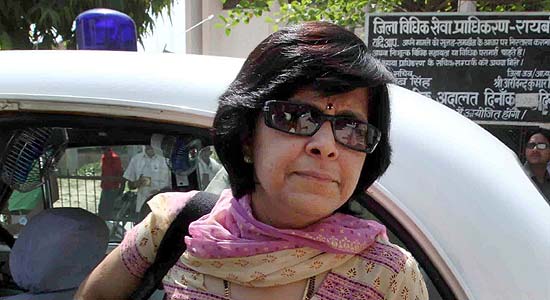 Senior IPS officer Anju Gupta, who deposed before a special CBI court in the Babri Masjid demolition case against Advani.

outlookindia.com
-0001-11-30T00:00:00+0553
The ghost of Babri Masjid demolition returned to haunt top BJP leader L K Advani today when a senior woman police officer deposed in a Special Court that he gave a provocative speech in Ayodhya moments before the mosque was demolished by sangh parivar activists.

"On December 6, 1992, Advani made a spirited speech from Ram Katha Kunj manch (dais), barely 150-200 metres from the disputed site which charged the people.

"He repeatedly said that the temple would be constructed at the same site," Anju Gupta, a 1990-batch IPS officer, said in her two-hour-long deposition before Chief Judicial Magistrate Gulab Singh in the court from which public was kept away.

Gupta, who was the personal security officer of Advani in Ayodhya on the fateful day on December 6, 1992, appeared as a prosecution witness in the Special CBI Court in the case in which he and BJP leader Murli Manohar Joshi, Uma Bharti and other sangh parivar leaders have been accused of inciting violence that led to the demolition.

"When the structure was being demolished, the leaders on the dais looked happy. They hugged each other, sweets were being distributed and there was an atmosphere of celebration while they were provoking 'kar sevaks' to demolish the structure.

"Uma Bharti and Sadhvi Rithambhara also hugged each other and congratulated Advani and Joshi. None of the leaders present at the spot made any effort to stop the demolition," Gupta said.

Advani, a former deputy prime minister, was discharged in the case in 2002 after conspiracy charge was dropped. But, three years later the Lucknow bench of the Allahabad High Court reinstated the charges of intentionally provoking people into rioting, arson and indulging in rioting with intent to create disorder as well as creating discord among communities.

Gupta, who was then posted as Assistant Superintendent of Police in Faizabad, was on special duty entrusted with the security of Advani.

Recalling the sequence of events on the fateful day, she said Advani and other leaders had reached Ayodhya on December 5 night. The next morning they went to Ram Katha Kunj, a single-storeyed building, whose roof was being used as a dais by the leaders to address 'kar sevaks'.

Gupta said when Advani and Joshi reached the place, Katiyar was already making a speech in which he sarcastically said, "Even a bird cannot flap its wings here".

Joshi, she said, told the gathering that the temple would be constructed at the same site where the mosque existed.

When she went to bring Advani's fleet of vehicles parked near the control room, for the first time she saw people scaling the walls of the disputed structure between 11:50 am and 12 noon.

"I saw some people carrying equipment used to demolish a building like iron rods and ploughs," she said adding, she immediately tried to contact the Ayodhya Police Control Room on witnessing the demolition activity at the spot.

Gupta said when she came back to Ram Katha Kunj, she saw that people had already climbed the structure and were destroying it continuously. "I saw that there was an atmosphere of excitement on the dais where the leaders were present."

She said on the basis of wireless information, she informed Advani that some people have entered the disputed structure and were demolishing it.

"I told him that people were falling from the domes of the structure and were getting injured on which Advani expressed concern and expressed his willingness to go to the site. But, I advised him against this," she said.

After consultation with senior officials, Gupta said the BJP leader was told that it was not desirable for him to go as if there was any mishap involving him, it may make the situation go out of control.

Advani then sent Bharti there but she came back after some time.

Gupta said while the BJP and Sangh leaders continued to provoke, the people razed the structure to the ground. The first dome was demolished between 1:45 pm and 2 pm and the third and the last one came down at 4:30 pm.

She said Advani asked her to arrange a telephonic talk with Chief Minister Kalyan Singh and the District Magistrate and SSP of Faizabad.

She said she was not in a position to do so. However, the DM and SSP came to Ram Katha Kunj office after messages were sent to them and they had a closed-door meeting with Adavni and others.

"I came to know that Advani later had a telephonic conversation with the Chief Minister," she said.

At the end of her deposition, the defence lawyer started cross-examination of Gupta which will be resumed on April 23.

Gupta claimed that the then DGP S C Dixit, who was also present on the dais, complimented and congratulated the security personnel on duty.

"Their names will be written in golden letters in the pages of history for their cooperation and not taking any action," Dixit said, according to her.

Gupta said religious hymns were sung all through the day and Acharya Dharmendra said this would erase the "blot", in a reference to Babri Masjid.

She said that at around 2.30 pm on that day she saw smoke emanating from the surrounding localities indicating some arson. Bharti then said from the dais that, "Muslims themselves were putting their houses on fire," Gupta said.

She said that as the demolition continued Advani talked to Uttar Pradesh Chief Minister.

"He also had a closed door meeting with the district magistrate and SSP after the first dome was demolished," she said.

The IPS officer said that adequate security arrangements were not made at the complex according to the threat perception as a result people were able to scale the structure within minutes after breaking the security cordon.

"Even before December 6, I saw that administration's writ was very weak and the police vehicles were allowed only after responding to Jai Shri Ram slogans being raised in a militant manner," she said.

Gupta said that even after the demolition the leaders appealed kar sewaks not to leave the place.

"The leaders were repeatedly asking the people not to leave the place and said that the work was still incomplete," she said.

She said that immediately after the demolition mediapersons were attacked and she herself rescued two photographers.