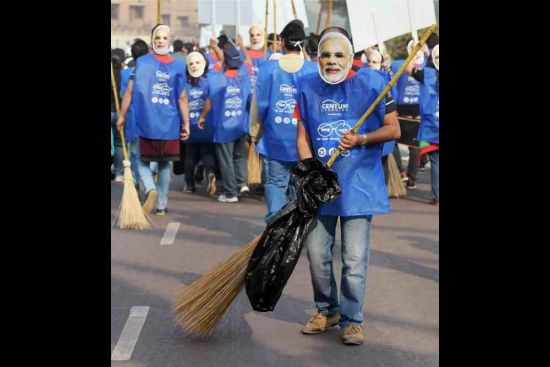 Author of Krishna Ki Atmkatha, Sharma was among nine personalities named by Modi while wielding a spade at Assi ghat here during his two-day visit to his parliamentary constituency early this month.

"Being an author, I have saved Rs 20 lakh from my royalties, awards and other prizes. I have now decided to donate this hard earned Rs 20 lakh for the renovation of one ghat in Varanasi which is in bad shape, to take forward Prime Minister Narendra Modi's Swachh Bharat campaign here," he said at a press conference.

"I feel privileged that PM Modi nominated me for this Clean India campaign. This is a revolutionary step of Modi and support from each and every individual is needed."

He said, "Cleaning is a continuous process and as the flow of Ganga continues, the same way this Swachh Bharat mission will progress".

UP Chief Minister Akhilesh Yadav and cricketers Suresh Raina and Mohammad Kaif were among those nominated.

He said there are nearly 84 ghats in Varanasi and nearly half a dozen among them are not even cemented.

"I take the responsibility of atleast one ghat to make it fully cemented (pakka). The same way people themselves must come forward to clean the ghats and take forward this Swachh Bharat campaign all across the country," he said.

Continue FREE with Ads Pay Rs. 1 to Read Without Ads
READ MORE IN:
Manu Sharma Books
Next Story : Pakistan to Have 200 Nuke Weapons by 2020: US Think Tank
Download the Outlook ​Magazines App. Six magazines, wherever you go! Play Store and App Store