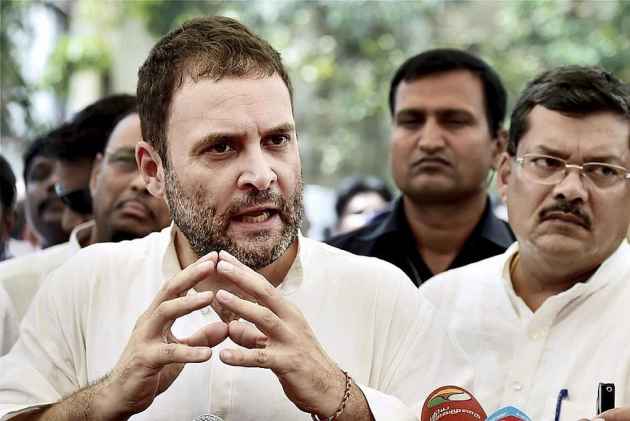 Congress vice president Rahul Gandhi has hit out at the government over the terror attack on Amarnath pilgrims, terming it a "grave and unacceptable security lapse" and asked Prime Minister Narendra Modi to accept responsibility.

India, he said, will never be intimidated by terrorists.

"This is a grave and unacceptable security lapse. The PM needs to accept responsibility and never allow it to happen again... India will never be intimidated by these terrorist cowards," he said in tweets.

Targeting the government, Congress chief spokesperson Randeep S Surjewala said the attack was a matter of serious security lapse on the part of the government and security forces.

The bus, which was fired upon by terrorists in Kashmir killing seven pilgrims, was not registered with the Amarnath Shrine Board and plying without any security cover long after the evening deadline fixed for the vehicles carrying Amarnath 'yatris', he said

"These lapses allowed terrorists an opportunity to attack pilgrims. The prime minister must answer," he said, condemning the "barbaric" attack.

He cited a string of terror attacks in the Valley and sought a time-bound inquiry into the matter.

Terrorists last night killed seven pilgrims, including six women, and injured 19 others as they struck at a bus in Kashmir's Anantnag district, in the worst attack on the annual pilgrimage since the year 2001.