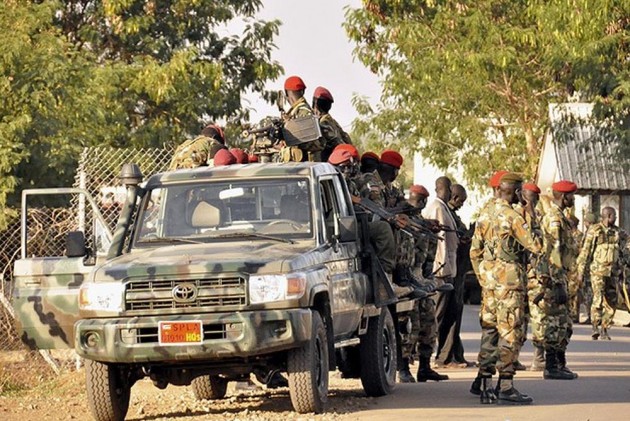 At least 13 people were killed when an angry football fan fired on others watching a match in a bar in South Sudan's capital Juba at the weekend, police said today.

Deputy police spokesman Kwacijwok Dominic Amondoc said the death toll had risen to 13 after some who were injured in the shooting during an English Premier League match on Saturday night died of their wounds.

Amondoc said 10 others were still being treated in hospital.

Among the injured was Wani Patrick, recovering from a bullet wound to his hand. "When I was shot I fell down and some youths fell on me. I was unable to stand up until he finished shooting all his bullets," he said. "Many people were shot, many people died."

The gunman, who appeared drunk, grew angry after being refused free entry to the bar where patrons had paid roughly USD 0.50 each to watch the Chelsea vs. Everton match on television.

The man stormed off, "but when he came back he was carrying a gun and just started shooting randomly," said Amondoc.

The whereabouts of the shooter are unclear with "investigations underway", according to deputy government spokesman Paul Akol Kordit.

"It's very unfortunate and we as a government condemn this in the very strongest terms possible," said Kordit.

He pledged that the government would "pledge that we will do what we can to protect our people and bringing to book such people who are killing innocent lives with no... Reason at all".

Insecurity in Juba has worsened since the start of a civil war nearly three years ago, with the widespread fighting leading to an increase in criminality and armed violence of all kinds.

In July the capital became a battleground as forces loyal to President Salva Kiir clashed with those of his former deputy turned rebel leader Riek Machar, forcing Machar to flee.

Successive rounds of internationally-backed peace talks and agreements have so far failed to bring peace to the world's newest nation, which won independence from Sudan in 2011.