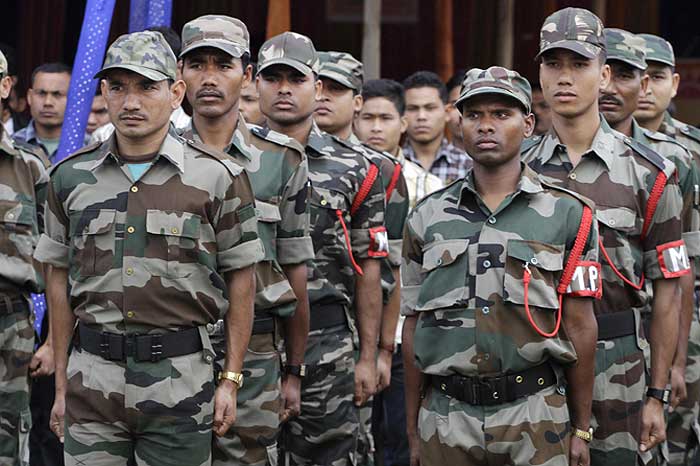 A BJP leader's son has been kidnapped from Assam's Tinsukia district with the Paresh Barua-led ULFA-Independent releasing an ISIS-style video that purportedly shows him surrounded by armed and masked militants and appealing to Chief Minister Sarbanda Sonowal to secure his early release.

The ULFA has demanded a ransom of Rs 1 crore.

The video, aired by local TV channels today, shows BJP leader and Tinsukia Zilla Parishad vice-president Lakheswar Moran's son Kuldeep, who was allegedly abducted by the group on August 1, pleading to Sonowal, his uncle and Sadiya BJP MLA Bolin Chetia and his parents to secure his release.

Surrounded by five masked men pointing their rifles towards the kneeling young man in a jungle area, Kuldeep is seen looking at a video camera and narrating his plight -- about his deteriorating health, about the danger to his life as he could be caught in a crossfire between his kidnappers and security forces and about being moved from place to place.

Meanwhile, Sonowal tonight appealed to the abductors to release him on humanitarian ground.

"I appeal to the abductors to release the boy as a humanitarian gesture. Our government believes that violence will achieve nothing and we are committed to the peace process," he told PTI.

MLA Chetia said he had received a phone call from the anti-talk ULFA-I faction demanding Rs one crore ransom for his nephew's release, adding paying that amount was not possible for him and he also did not endorse the idea of paying ransom.

Kuldeep's mother and wife had earlier appealed to the ULFA-I to release him saying they do not have the finances to pay the ransom.

Assam and Arunachal Pradesh police are carrying out search operations to rescue Kuldeep from his abductors.