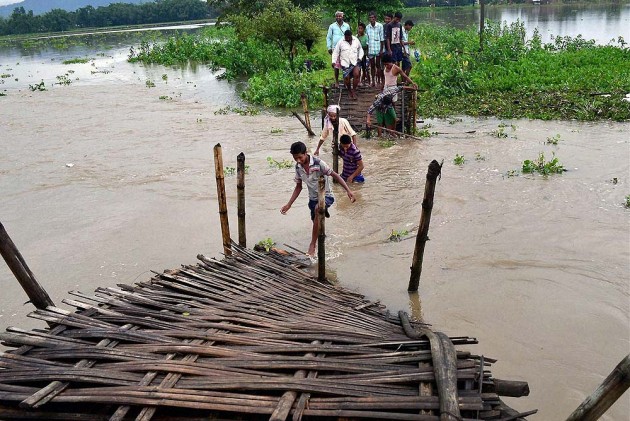 The flood situation in Assam worsened today with over 27,000 people affected in more than 70 villages across the state.

Assam State Disaster Management Authority (ASDMA) said in its daily flood report that an estimated 27,200 people are affected as of now in 72 villages across Barpeta, Dhemaji, Tinsukia, Morigaon and Lakhimpur districts.

Till yesterday, over 19,100 people were hit across 62 villages under five districts across the state.

Highest number of people are hit in Lakhimpur district with over 16,000 persons reeling under flood waters, followed by Dhemaji with more than 4,600 people affected at present, ASDMA said.

Authorities are running three relief camps in Tinsukia, where a total of 198 persons are sheltered presently, it added.

Nearly 1,600 hectares of crop areas are under water, the report mentioned.

The death toll in the first wave of flood in Assam remained at three - one each in Bongaigaon, Lakhimpur and Baksa districts.

At present, the Brahmaputra is flowing above the danger mark at Nematighat in Jorhat, ASDMA said.