At present, 22.5 lakh people are affected in 21 districts, the ASDMA said. 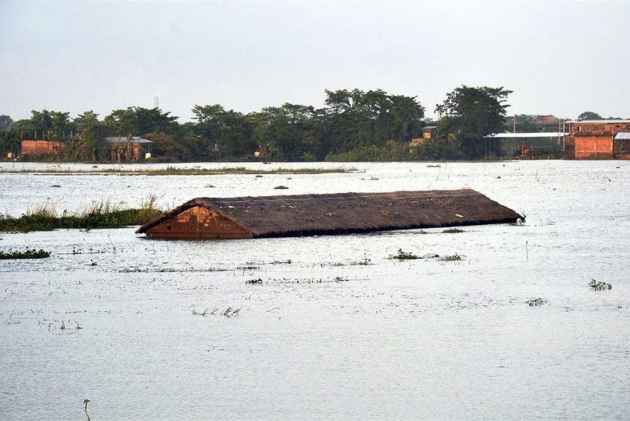 The flood situation deteriorated in Assam on Sunday, where the Army was called out for rescue operations as 10 more people were killed and 22.5 lakh affected in 21 districts.

"The prime minister expressed concern and assured all possible help and support to the state government in handling the situation," the statement said.

Sonowal informed Modi about the devastation caused by the flood in middle and upper Assam and the disruption to vehicular movement on National Highway 37, the lifeline between the two areas.

The Army's Red Horns Division of the Gajraj Corps has dispatched multiple teams after receiving calls for help from various district administrations, a defence spokesperson said.

According to the ASDMA, 10 persons were today killed in flood-related incidents in three districts.

While six persons lost their lives in Kokrajhar, three died in Bongaigaon and one in Biswanath.

The flood situation is likely to worsen with Brahmaputra and 10 other rivers flowing above the danger mark at 15 places, including the state capital.

At present, 22.5 lakh people are affected in 21 districts, the ASDMA said.

Nagaon Deputy Commissioner Shamsher Singh said, a crucial dyke at Hatimura was breached by the Brahmaputra at 2 am and its flood waters inundated vast areas of the district.

The authorities have issued an alert in the district with flood waters submerging the NH-37 at four places between Kaliabor and Jakhalabandha, forcing the authorities to stop traffic, thereby cutting the link between upper and middle Assam.

Singh said personnel from the Army, NDRF and SDRF have been engaged in rescue operations, while people in Nagaon town have resorted to panic purchase of goods from the market.

A defence spokesperson said about 3,000 people have been rescued by the Army from Bodoland Territorial Area Districts and Karbi Anglong.

As per the ASDMA report, Dhubri is the worst-affected with 3.98 lakh sufferers, followed by Morigaon with 3.14 lakh people affected in the deluge.

The condition in Morigaon suddenly worsened after the surging water breached the dyke of Brahmaputra in Lahorighat and flooded more than 100 villages in Lahorighat and Bhuragaon revenue circle, affecting over one lakh people.

Currently, 2,734 villages are under water and over 1.35 lakh hectares of crop areas have been damaged across the state, the ASDMA said.

Authorities are running 678 relief camps and distribution centres in 17 districts, where 1,83,584 people are taking shelter at present.

At least 4,000 persons have been evacuated to safer places by the SDRF, NDRF and Army personnel in many districts.

Currently, the Brahmaputra is flowing above the danger mark at Guwahati, Nimatighat in Jorhat, Tezpur in Sonitpur, Goalpara and Dhubri towns.

Other rivers like Burhidehing at Khowang in Dibrugarh, Subansiri at Badatighat in Lakhimpur, Dhansiri at Numaligarh in Golaghat, Jia Bharali at NT Road Crossing in Sonitpur, Puthimari at NH Road Crossing in Kamrup, Manas at NH Road Crossing at Barpeta, Beki at Road Bridge in Barpeta, Sankosh at Golokganj in Dhubri, Katakhal at Matizuri in Hailakandi and Kushiyara at Karimganj town are flowing above the danger marks.

NF Railway Chief Public Relations Officer Pranav Jyoti Sharma said, a total of 22 trains have been cancelled, while 14 others are stranded at various places as tracks are flooded at many places across the North East.

Most of the forest areas in Kaziranga National Park, Pobitora Wildlife Sanctuary and Lawkhua wildlife sanctuary are under flood waters.