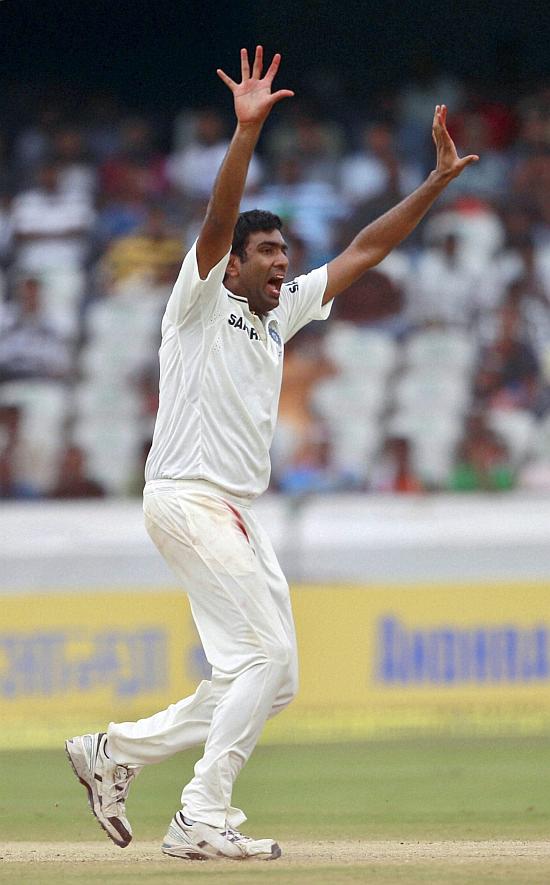 outlookindia.com
-0001-11-30T00:00:00+0553
Ravichandran Ashwin produced a career-best 12-wicket match haul as a merciless India relied on the spinners to crush New Zealand by an innings and 115 runs to take a 1-0 lead in the two-match Test series here today.

New Zealand batting collapsed yet again as they lost the last seven wickets for 26 runs to get bundled out for a meagre 164 in the second innings, shortly after the tea break to give the hosts an easy victory with more than a day to spare.

Ashwin's match figures of 12 for 85 is the best by an Indian in a Test match against New Zealand, eclipsing S Venkatraghavan's 12 for 140. The Tamil Nadu spinner foxed the inexperienced Kiwi batsmen by extracting a lot of turn and bounce from the strip as he capped 6/54 to follow up his first innings tally of 6/31.

Ojha returned with figures of three for 48 to lend a fine support at the other end as the spin duo shared nine wickets between them exposing the Black Caps' vulnerability to play spin. India had a frustrating first session as the overnight duo of Brendon McCullum (42) and Kane Williamson (52) put up a brave front after resuming at 44 for one, following on in the second innings.

But after Umesh Yadav (1/32) broke the 72-run second wicket partnership, New Zealand lost their remaining nine wickets in 34.4 overs with more than a day left for the match. New Zealand were 146 for six at tea but lost the remaining four wickets in 25 minutes after resumption as the spin duo wreaked havoc in the camp.

It was also India's first Test win in nine months following a 0-4 spanking in Australia as the batting stalwarts Rahul Dravid and VVS Laxman retired in the aftermath of the series. The two teams will now travel to Bangalore for the second Test to begin from August 31.

Continue FREE with Ads Pay Rs. 1 to Read Without Ads
READ MORE IN:
Sports
Next Story : Hazare Comes Out With a New Blog
Download the Outlook ​Magazines App. Six magazines, wherever you go! Play Store and App Store