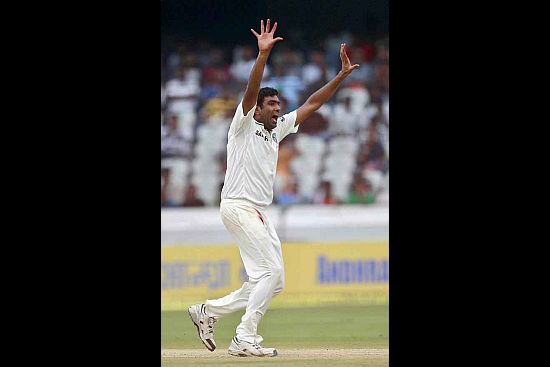 India's Ravichandran Ashwin today became the number one Test all-rounder in ICC rankings following his fine show with the bat in the fourth cricket Test against England in Manchester.

Ashwin scored 40 and 46 not out at the Old Trafford though India lost the Test by an innings and 54 runs. He though was wicketless in his 14 overs in England's first innings.

The Indian off-spinner, who now has 372 rating points to his kitty, has displaced South Africa's Vernon Philander (365) at the top of the Reliance ICC Player Rankings for Test all-rounders.

Bangladesh's Shakib Al Hasan was at third spot while Englishman Stuart Broad has moved ahead of Australia's Mitchell Johnson in fourth position.

Meanwhile, Sri Lanka's Kumar Sangakkara has regained the number one Test batsman spot following his 10th double century in Galle against Pakistan while India's Cheteshwar Pujara and Virat Kohli slipped down the ladder.

The South African had snatched the number one spot from his team-mate Hashim Amla in October 2013 and spent a total stretch of 287 days and 33 Tests at the top.

Sangakkara had first surged to the top of the batting charts in December 2007 when he replaced Ricky Ponting, while he last claimed the top spot in November 2012 in Galle before Australia's Michael Clarke dislodged him following his 230 against South Africa in the Adelaide Test.

Sangakkara has now spent a total of 81 Tests and 671 days as the top-ranked Test batsman. ICC Hall of Famer Garry Sobers holds the record for the most Tests spent as number-one with 189 while Viv Richards is second with 179.

Mahela Jayawardena, playing his last Test series, has retained 14th position following his contributions of 59 and 26, but will seek to make his farewell Test a memorable one, which can potentially help him end higher on the rankings table.

Pujara lost two spots to occupy 12th spot though he remained the highest-ranking Indian while another struggling team-mate Kohli slipped five places to be at 20th.

In the Reliance ICC Player Rankings for Test bowlers, England's win against India at Old Trafford by an innings and 54 runs has seen its bowlers charge up the rankings table.

Moeen Ali's four for 39 in India's second innings has allowed him to jump four places to a career-high 33rd spot.

Ashwin remained the highest-ranking Indian bowler though he lost one spot to be at 13th while Pragyan Ojha and Ishant Sharma are at 15th and 20th respectively.