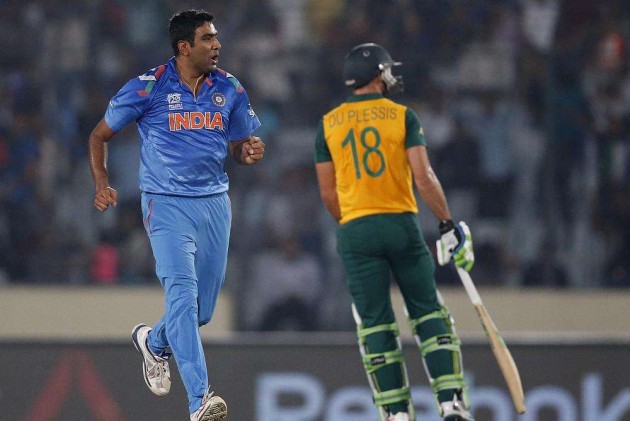 Ravichandran Ashwin held on to his top spot, while Ravindra Jadeja rose a rung to be fifth in the all-rounders' chart of the latest ICC Test rankings issued today.

However, no Indian found a place in the top-10 of batsmen's rankings even though Ashwin (2nd) and Jadeja (8th) represented the country in the bowlers' list.

Elsewhere, Kane Williamson stood just two steps away from the top spot in the rankings for Test batsmen, which were released after the conclusion of the Dunedin and Hobart Tests.

Williamson has earned the rise to third place, just three points off South Africa's AB de Villiers, thanks to two consistent knocks of 88 and 71, helping New Zealand extend its winning streak to 12 home Test victories in a row, after they beat Sri Lanka by 122 runs.

Williamson's team-mate Martin Guptill has jumped up a remarkable 18 places, after scoring 156 and 46. Guptill was rewarded with only his second man of the match award in Tests.

Black Caps skipper Brendon McCullum has moved up two places to 17th, while his Sri Lanka opposite number Angelo Matthews has marked the visiting side's presence in the top 10 batsman rankings, down one place to seventh.

Over in Hobart, Australia skipper Steven Smith has tumbled three places to fourth and he is now just 11 points ahead of his team-mate David Warner.

But there was better news for Adam Voges who led the charge for Australia with a first innings double-century. Voges' knock has vaulted him 19 places to a career-high 15th place in the latest rankings.

Shaun Marsh supported Voges ably, scoring 182, and together the pair added a sixth-highest all time partnership of 449 runs. In the process, Marsh has risen 17 spots to a career best 37th in the batsman rankings.

West Indies Darren Bravo has been rewarded for being the lone centurion from his side, moving up two spots to 25th.

In the ICC Player Rankings for Test Bowlers, Australia's Josh Hazlewood has entered the top 10, rising up four spots after claiming seven wickets in Australia's win over the West Indies, while off-spinner Nathan Lyon has moved up two spots into 15th after a three-wicket haul in Hobart.