'Arundhati Roy Was Vouching for the Rights of an Anti-National,' Shiv Sena Backs Paresh Rawal 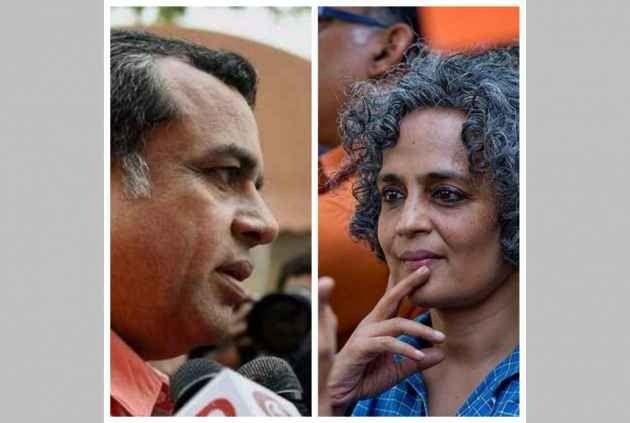 Print
A
A
A
increase text size
Outlook May 25, 2017 14:19 IST 'Arundhati Roy Was Vouching for the Rights of an Anti-National,' Shiv Sena Backs Paresh Rawal

The Shiv Sena on Thursday backed Paresh Rawal, while coming down heavily on author Arundhati Roy, citing the actor-turned-politician gave a befitting reply to Roy who opposed the honour which was accorded to Major Nitin Leetul Gogoi.

Asserting that the man who was tied to the jeep by Major Gogoi was instigating violence, the Shiv Sena in its editorial piece 'Samna' slammed Roy and said that people like her who raise their voices professing human right violation for an anti-national are worth 'pity.'

"When a video of a man being tied to jeep in Kashmir surfaced, our Army was blamed for it. These so called supporters of human rights started sympathising with an anti-national, who was provoking stone-pelters. Arundhati Roy, who was vouching for the rights of an anti-national, was given a befitting reply by Paresh Rawal Ji," the editorial cited.

The Shiv Sena also urged Prime Minister Narendra Modi to ponder over a law, which would punish people who support anti-national elements.

Earlier, Rawal raked up a Twitter storm when he took to the micro-blogging site to post a seemingly out-of-context tweet that conveyed the idea of 'tying' Roy to an Army jeep, drawing reference from a similar incident when a Kashmiri resident was tied to a jeep last month.

Rawal's tweet drew ire on the social media and people outrightly condemned the actor's "education." Many of them even highlighted the irony of his statement vis-a-vis his powerful performances in the movies.

One of the Twitter users wrote, "This tweet proves that lack of education ruins the ability of a Human to behave like a Human," while another tweeted, "Your acting was often commendable but your prejudiced mindset is condemnable. Telling d army to hide behind a brave woman is shameful."

An award-winning writer, Arundhati Roy is known for her controversial views on Kashmir. She has also widely criticised the Army's role in the Valley.

In April, a Kashmiri resident, allegedly a stone-pelter, was tied to an Army jeep as a human shield. This incident sparked an outrage in the Valley and across the country, following which an inquiry was launched into the incident. (ANI)