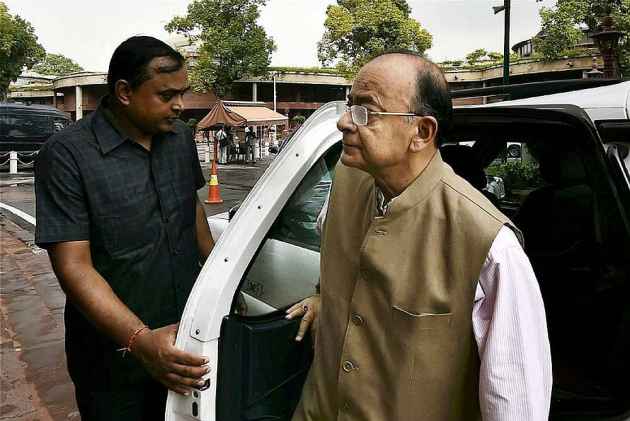 Finance Minister Arun Jaitley today defended the State Bank of India's decision to cut interest rate on saving accounts of less than Rs 1 crore, saying the move was in sync with reduction in lending rate.

Responding to a Zero Hour mention of the SBI's decision to cut interest rate on saving accounts with less than Rs 1 crore deposit to 3.5 per cent from 4 per cent, he said to protect the interests of senior citizens, the government has already floated a deposit scheme that guarantees 8-plus per cent interest rate.

High interest rate on savings and fix deposits was during a time when inflation was 10-11 per cent and sluggishness was setting in the economy. So when the lending rate came down, so did savings account, Jaitley said.

He said for senior citizens and retired persons, the government has bought a pension scheme that guarantees 8 per cent interest rate.

Prime Minister Narendra Modi had announced the Pradhan Mantri Vyaya Vandana Yojana (PMVYY) in December last year which was launched in May.

"The effective rate comes to 8.3 per cent," he said, adding that the scheme is managed by LIC.

To opposition demand for a discussion on sluggish in economy and job losses, he said all issues the opposition want can be discussed and debated if they allow the House to function from 11 AM to 6 PM every day.

Earlier, Derek O'Brien (TMC) raised the issue through a Zero Hour mention saying the SBI reasoned the decision to Rs 1.5 lakh crore moving into the banking system after demonetisation of old 500 and 1000 rupee notes. There was no pick up in borrowing and economic activity was low, he said.

Stating that 90 per cent of saving bank deposits are of less than Rs 1 crore, he said the move to cut interest rate has affected the small depositors, senior citizens and pensioners the most.

Fixed deposit rate three years ago was 9-10 per cent, which has now fallen below 6 per cent, he said.

With low interest rate, the alternate chit funds will open up, he said. "This decision will increase infiltration of chit funds."

Raising the Pearl Chit Fund case, he said who were the people in the government in Delhi and Punjab supporting the chit fund.

O'Brien said 1.5 million jobs have been lost after demonetisation and even NITI Aayog vice chairman Arvind Panagriya has resigned and returning to the US.

The government, he charged, is not able to recover Rs 7 lakh crore NPA with big corporates and is hurting common people with such decisions.

Jaitley said the NPA issue can be discussed when a banking amendment bill comes up for debate in the House.

Chandrapal Singh Yadav (SP) raised the issue of villagers not getting compensation for agriculture land and their residential plots being taken away by army cantonment.

The silt is blocking flow of water and the river is changing course, she said, adding that the Bhagalpur Engineering College may well be under water soon due to this.