Arrest Zakir Naik the Moment he Returns to India: Sena 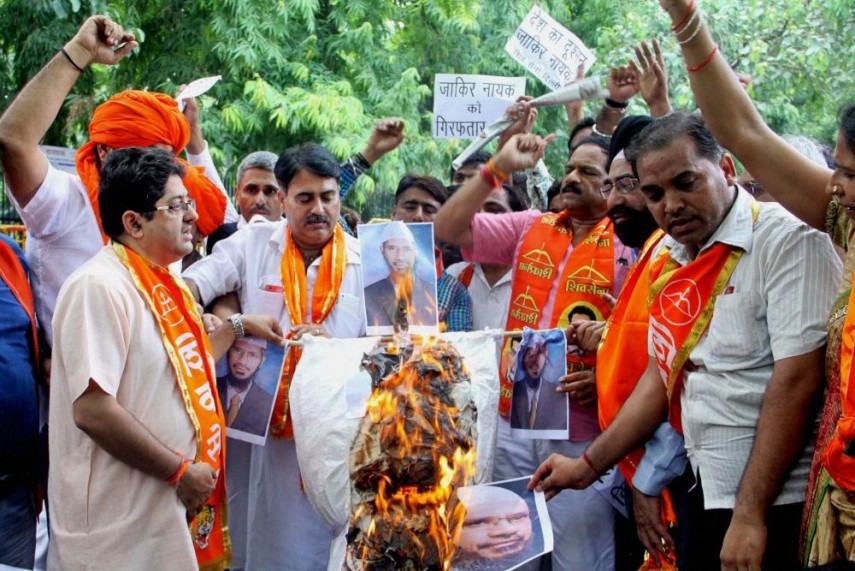 Print
A
A
A
increase text size
Outlook July 11, 2016 12:37 IST Arrest Zakir Naik the Moment he Returns to India: Sena

Mumbai-based Naik, who is expected to be back in the city this afternoon, has been facing the heat following reports that his alleged "provocative" speeches had inspired some of the militants who carried out Bangladesh's worst terror attack in a cafe in capital Dhaka.

The preacher has dismissed the allegations against him.

"The way fanatics like Pakistan-based Azhar Masood openly spew venom, people like Zakir Naik carry out through their social work in the name of peace by covert means...Naik has been nurturing anti-nationals for the last several years and the lessons in peace preached by him have been unmasked after the Dhaka carnage," the Sena said in a stinging editorial in its moutpiece Saamana.

Taking a dig at the state and central governments for allowing the preacher to carry on with his activities, Sena said Naik should have been thrown into the same cell as Mumbai attack convict Ajmal Kasab long back.

"Peace TV is in reality Preach TV. The Narendra Modi government at the Centre and the Devendra Fadnavis government in Maharashtra should show some courage and destroy all machinery of this channel," it said.

"The government can bring back black money when it wants to, but for now, the government should immediately destroy the financiers of Naik because the game he is playing will destroy our nation. Arrest him as soon as he returns to the country," the Sena demanded.

Notably, the Bangladesh government yesterday banned the broadcast of Naik's Peace TV after reports that his "provocative" speeches inspired some of the Bangladeshi militants, who killed 22 people, mostly foreigners, at an upscale restaurant in Dhaka on July 1.