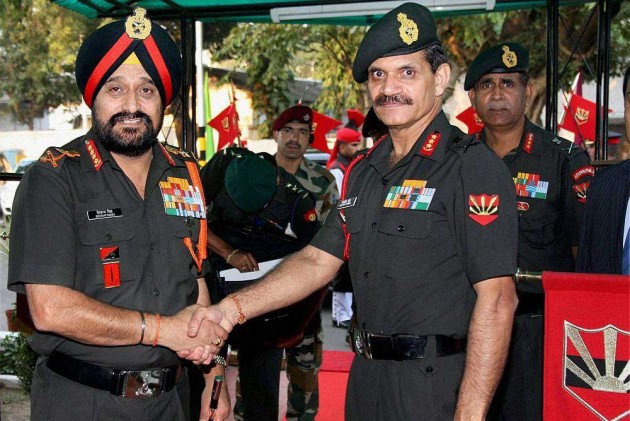 In an unprecedented step of a serving Army Chief taking on one of his predecessors, General Dalbir Singh has alleged that he was "sought to be victimised" by Gen(retd) V K Singh, now an Union Minister, with the sole purpose of denying him promotion as Army Commander.

Gen Dalbir Singh made the allegation in an affidavit filed by him in his personal capacity while responding to a petition moved by Lt Gen (Retd) Ravi Dastane who had alleged "favouritism" during his selection as the Army Commander.

"I was sought to be victimised by the then COAS with the sole purpose of denying promotion to the appointment of Army Commander. False, baseless and imaginary allegations of lapses were levelled against me in the show cause notice (of May 19, 2012)," Gen Dalbir Singh said. V K Singh is currently the Minister of State for External Affairs.

"Despite their being no evidence against me at the Court of Inquiry, the show cause notice was issued malafidely," he said, adding that, "no material whatsoever of attendant circumstances was provided to me. The show cause notice issued, beside suffering from vagueness, was premeditated and also against the principles of natural justice".

Dalbir Singh was placed under a discipline and vigilance (DV) ban by the then COAS V K Singh in 2012 for his alleged "failure of command and control" after a Court of Inquiry was ordered into an operation carried out in Jorhat, Assam on the night of December 20-21, 2011 by the 3 Corps Intelligence and Surveillance Unit.

Dalbir Singh, who was the then General Officer Commanding of the unit, said that the imposition of DV ban upon him and issuance of show cause notice by the then COAS "was illegal and premeditated".

"It is thus established that I was victimized for extraneous reasons by the then COAS and hence the illegal imposition of DV ban by the then COAS could not be made the basis by the apellant to challenge my appointment as GOC-in-C, Eastern Command. In fact, it is the answering respondent who is the victim and not the appellant, as is sought to be made by him," he said.

The affidavit further said, "The passing of directions for initiating administrative action against me after about one month of having already finalised the Court of Inquiry smacks of a motivated, biased, arbitrary and malicious intent to punish me which the then COAS executed apparently as planned by him".

Regarding the Jorhat operation, Dalbir Singh has said in his affidavit that "on that day, I was away on part of annual leave and rejoined duty on 26 Dec 2011".

Dalbir Singh's promotion as GOC-in-C, Eastern Command, with effect from June 15, 2012 was cleared by General Bikram Singh who had reversed the DV ban after V K Singh had retired on May 31, 2012.

Dastane has alleged in his plea that he was eligible to be the Army Commander but was denied the opportunity by General Bikram Singh who had favoured Dalbir Singh despite the fact that he was under a DV ban at the relevant time.

The Ministry of Defence, in its affidavit filed earlier in the apex court, had rejected Dastane's contentions and had also censured the manner in which V K Singh had placed Dalbir Singh under DV ban.