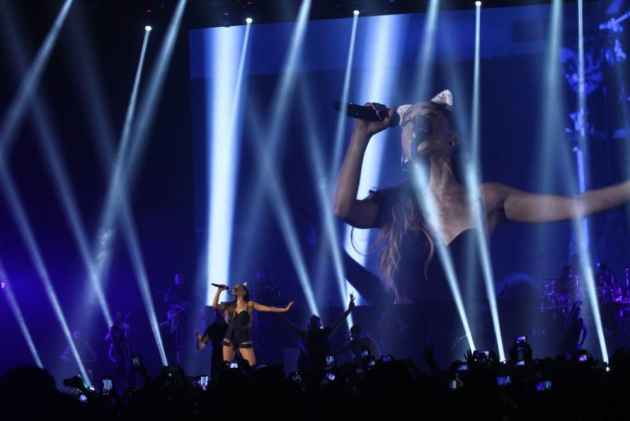 Print
A
A
A
increase text size
Outlook May 27, 2017 12:37 IST Ariana Grande to Perform Benefit Concert for Attack Victims in Manchester

Singer Ariana Grande will hold a benefit concert in Manchester to raise money for the victims of the attack at her May 22 gig in the British city.

In a lengthy post on Twitter, the 23-year-old pop diva said her "heart, prayers and deepest condolences" were with those affected by the explosion that claimed the lives of 22 people, including children.

Grande said she planned to return to Manchester following the deadly attack to spend time with her fans and to "have a benefit concert in honour of and to raise money for the victims and their family."

"There is nothing I or anyone can do to take away the pain you are feeling or to make this better. However, I extend my hand and heart and everything I possibly can give to you and yours, should you want or need my help in any way."

The "Side to Side" hitmaker said she had been thinking of her fans non stop over the past week.

"I am sorry for the pain and fear that you must be feeling and for the trauma that you, too, must be experiencing. We will not quit or operate in fear. We won't let this divide us. We won't let hate win.

"Our response to this violence must be to come closer together, to help each other, to love more, to sing louder and to live more kindly and generously than we did before. I'll be returning to the incredibly brave city of Manchester to spend time with my fans and to have a benefit concert in honour of and to raise money for the victims and their families," she continued.

Grande then thanked her fellow musicians and friends for reaching out to be a part of "our expression of love for Manchester".

"I will have details to share with you as soon as everything is confirmed."

"We will continue in honour of the ones we lost, their loved ones, my fans and all affected by this tragedy. They will be on my mind and in my heart everyday and I will think of them with everything I do for the rest of my life."

Soon after tweeting the note, she shared a link of a local fundraiser established by the Manchester Evening News, which read "Donate to support families of those killed and injured in the Manchester Arena attack".

Continue FREE with Ads Pay Rs. 1 to Read Without Ads
READ MORE IN:
Arts & Entertainment
Next Story : 'Have A Bath Before Meeting CM Adityanath', VIllagers Told, Given Soaps And Shampoos To 'Smell Good'
Download the Outlook ​Magazines App. Six magazines, wherever you go! Play Store and App Store