Are You On Twitter? US Journalist Megyn Kelly Asks Modi, Gets Trolled 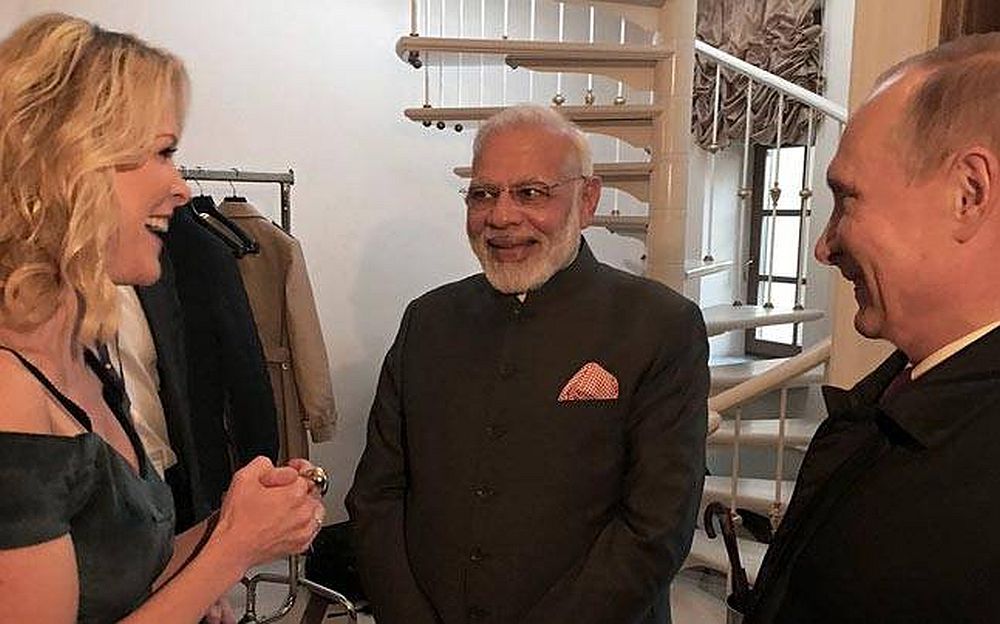 Print
A
A
A
increase text size
Outlook June 02, 2017 17:15 IST Are You On Twitter? US Journalist Megyn Kelly Asks Modi, Gets Trolled

American TV anchor Megyn Kelly was on Friday trolled on social media for asking Prime Minister Narendra Modi if he was Twitter.

Kelly, a journalist and news anchor at National Broadcasting Company, asked the question while interacting with Modi and Russian President Vladimir Putin ahead of today's St. Petersburg International Economic Forum which she was to moderate.

After shaking hands with Putin and Modi, the prime minister praised Kelly's picture on her Twitter account where she is seen posing with an umbrella.

Modi, the world's second most followed leader on Twitter after US President Donald Trump, then laughed off her question and continued the interaction.

Before dinner, had a brief interaction with noted journalist & commentator @megynkelly, moderator of tomorrow's session at the @SPIEF. pic.twitter.com/5CQ58Zn5hP

As the video containing the question went viral, she was trolled on social media with some users wondering why she had not done her homework before asking the question.

One Twitter user said, "@megynkelly You asked the wrong guy is he's on Twitter !!! You're a journalist, some homework is needed!"

Another user said, "Megyn Kelly To Modi - Are You On Twitter? @megynkelly Please have a look on the Follower stats of @narendramodi and yours.

"Megyn Kelly asking #Modi if he's on #twitter tell either of 2 things. The world media is still ignorant of India or she was just being stupid," another user tweeted.

"Unlike @megynkelly, Indian #PM @narendramodi did do his homework & makes small talk about umbrella photo on twitter!," tweeted another user.

In April, Modi emerged as the most followed world leader on photo-sharing app Instagram with a whopping 6.9 million followers, surpassing Trump.