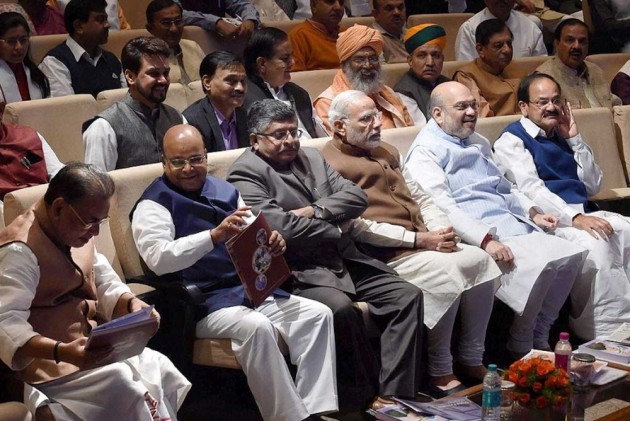 Welcoming the Supreme Court's order on national anthem, BJP today said it will strengthen the spirit of nationalism and the idea of 'Ek Bharat, Shrestha Bharat'.

The apex court today directed that cinema halls across the country must play the national anthem before the screening of a film and people should stand up as a mark of respect.

"BJP welcomes this order and commend the court for this. It will strengthen the spirit of nationalism. National anthem and tri-colour unite us as a nation and this unity will be further strengthened," party's National Secretary Shrikant Sharma said.

A strong national spirit will help India become a world leader, he said.

BJP spokesperson Nalin Kohli said the order is a reminder to people that they should have affection and duty towards national institutions and symbols.

"Its a welcome order. Of late, there has been certain controversies. People are not standing up in cinema halls when national anthem is being played.

"The SC has adjudicated and passed an order in terms of it. That has to be welcomed. It is a reminder to people that we have to have affection and duty towards our national institutions and symbols," Kohli said.

The Supreme Court also directed that the national flag should be shown on screen when the anthem is played.

"People must feel this is my country and this is my motherland," a bench of justices Dipak Misra and Amitava Roy said while stressing that it is the duty of every citizen of the country to show respect to the national anthem and the flag.

Directing that its order be shown in electronic and print media and be followed in letter and spirit, the court said, "Time has come when people should feel they live in a nation."