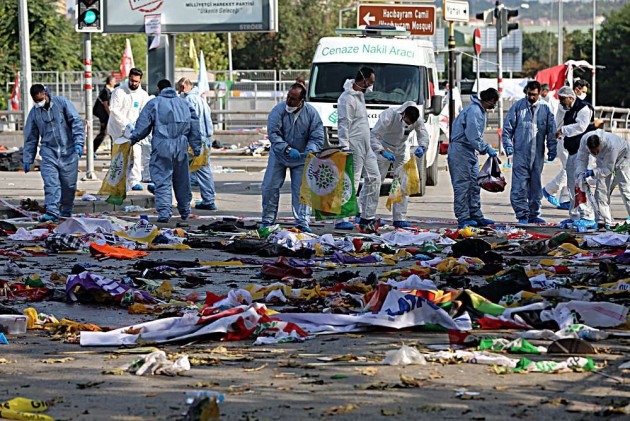 At least 95 people were killed in Ankara when bombs set off by two suspected suicide attackers ripped through a crowd of leftist and pro-Kurdish activists at a peace rally, in the deadliest such attack in Turkey's recent history.

The twin blasts that occurred yesterday, near Ankara's main train station, ratcheted up tensions ahead of Turkey's November 1 snap elections which were already soaring amid the government's offensive on Kurdish militants.

Bodies of slain demonstrators were seen strewn across the ground after the explosions, with the banners they had been holding for the "Work, Peace and Democracy" march lying next to them.

The attack also left 246 wounded, 48 of whom are in intensive care, according to an updated toll announced by Prime Minister Ahmet Davutoglu's office.

President Recep Tayyip Erdogan denounced what he called a "heinous attack" targeting "our unity and our country's peace".

Declaring three days of mourning, Davutoglu said there were "strong signs" the attack was carried out by two suicide bombers.

International condemnation of the bloodshed was swift. German Chancellor Angela Merkel expressed "sadness and dismay" over the attacks, while US President Barack Obama and Russia's Vladimir Putin offered their condolences to Erdogan.

There were scenes of chaos after the blasts, as ambulances raced to get to the wounded and police cordoned off the blood-stained area around the train station.

"We heard one huge blast and then one smaller explosion and then there was a great movement and panic. Then we saw corpses around the station," said Ahmet Onen, 52.

"A demonstration that was to promote peace has turned into a massacre, I don't understand this," he said, sobbing.

Reports said hundreds of people in Ankara rushed to hospitals to donate blood for the victims.

The death toll surpassed that of the May 2013 twin bombings in Reyhanli on the Syrian border that killed over 50 people.

UN Secretary General Ban Ki-moon said in a statement he "expects the perpetrators of these terrorist acts to be swiftly brought to justice".